Irfaan Ali not banking on oil money to restart economy 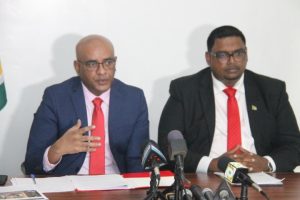 The opposition People’s Progressive Party (PPP)—citing a decline in consumer spending, high unemployment and increased government borrowing—says if it wins the March general elections, it will not depend on oil revenues alone, but rather, tap into multiple revenue streams to boost the economy.

PPP presidential candidate Irfaan Ali said his administration’s strategy would not depend on oil and gas revenue, only. “Our focus cannot be on a single barrel oil and gas. Oil and gas will help us to accelerate growth and development but it’s not the totality of the economy. That is why we are going to support mining, that is why we are going to support forestry, agriculture so that all the sectors can grow, all the sectors can expand, and all the sectors can create wealth that would help us to support a social infrastructure that will bring the best quality of health care, education, water and electricity to the people of our country.”

Incumbent Finance Minister, Winston Jordan, who had served as Budget Director while former President Bharrat Jagdeo had been Finance Minister, has already acknowledged that the US$300 million per year from 2020, at 120,000 barrels per day, will be insufficient to fund public projects.

Jordan has said the 2020 election campaign is not confined to what the oil money will be spent on from this year but for the next five years by which time oil production is expected to peak at 750,000 barrels per day.

“It is a huge challenge, a major, major economic challenge in terms of addressing all those concerns with a fairly limited amount of money coming in through the fund so you have to restart the economic activities in the other sectors because, if you don’t the oil and gas money alone can’t pump-prime our economy,” added Ali.

Ali restated what his party has been saying for more than three years now, the steep increase in existing taxes and new taxes have caused an economic downturn. He said the tax revenue has increased by 62 percent or GYD$106 billion, with GYD$17.7 billion in value added tax (VAT). “The facts here clearly show that taxation has increased in a way that has affected every single one of us in this country and in this room,” he said.

He said figures show a reduction in consumption by GY$29.7 billion or about GYD$161,000 less compared to 2014. “When people are using more disposal income to pay taxes, then their consumption is decreasing. They’ll buy less, they’ll spend less in the shop and that is why you are hearing all the complaints from the retail sector,” he said.

The PPP presidential candidate added that part of his administration’s promise to revive the economy is to reduce taxes and increase consumer spending. “We have outlined a clear strategy in terms of not only reversing all these taxes and burdensome fees so that we can put back that $161,000 in every household, ensuring that you get that as disposable income that would increase back consumption and business would pick up and accelerate because there would be more disposable income in the system to generate business and create demand because at the end of the day you have to be able to create demand,” he said.

Although the incumbent A Partnership for National Unity+Alliance For Change (APNU+AFC) coalition has boasted increased salaries and old age pensions since coming to power in 2015, Ali labelled the state of Guyana’s economy as “very disastrous.”

The PPP presidential candidate cited a loss of 30,000 jobs in the productive sector over the last five years, resulting in a decline in foreign exchange earnings from sugar, forestry and bauxite to the amount of US$548 million. He noted that 6,000 jobs in the forestry sector, which is in a “serious state of decline”, have been lost; 60 percent of the gold mining dredges that were operating in 2014 are now shut down, resulting in a domino effect on shopping and transportation services.

Ali said a PPP administration would provide incentives, improve drainage and irrigation and remove the VAT on equipment for the rice industry and target higher priced markets, as well as secure the “transparent involvement” of the private sector in the sugar industry.