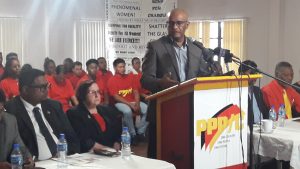 PPP General Secretary, Bharrat Jagdeo speaking at a press launch of its mini-manifesto for the 2020 general elections (file photo)

General Secretary of the opposition People’s Progressive Party (PPP), Bharrat Jagdeo on Monday said his party wants the Guyana Elections Commission (GECOM) to conduct another round of house-to-house verification in a last ditch effort to find 6,534 registrants before the final voters’ list is prepared.

“There could be a process of revisiting them before the OLE (Original List of Electors) comes out so they would be on the Revised Voters’ List but once the re-verification takes place…and then have those either removed, or if they are non-existent or remain on the revised voters list,” he told a news conference.

Jagdeo said he would be hard-pressed to see how GECOM Chairman, Claudette Singh could agree with the three pro-governing coalition election commissioners that the names of those not found should be included in the final voters’ list without them being verified as located at the addresses they had given during registration in July and August, 2019. “We would find it very unusual that the Chair would vote to embark on a process for verifying the 16,000 names and then seek to include names that are unverified because the purpose of the exercise would have been defeated so we are awaiting official notification of this matter because there seems to be some confusion surrounding it,’ he said.

The Opposition Leader recommended that the 6,500-odd registrants be included in the Revised List of Electors, which would be posted up at public places for another round of scrutiny, and then be subjected to another house-to-house check before the final voters’ list is produced.

The PPP General Secretary said hundreds of persons registered at addresses of “empty lots” were available and could be made available to the media.

General and regional administrative council elections are scheduled for March 2, 2020.