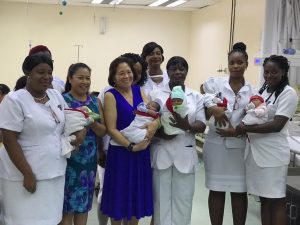 The Department of Public Information says four of the babies were brought into the world by natural birth while the remaining two were birthed via cesarean section.

The first mother to give birth on Christmas Day was Sarah Beckharry to a son at 00:38 hrs. She was followed by Oshana Bruce at 02:13 hrs and Aliyah Bacchus at 03:25 hrs, both giving birth to sons as well.

The mothers who underwent cesarean section were Premattie Mahadeo who delivered a girl at 04:00 hrs and Marcelle Josiah a boy at 05:52 hrs.

The last mother to give birth was Shameza Wiltshire at exactly 07:00 hrs.

The First Lady and the State Minister took the opportunity to visit the paediatric ward to extend Christmas wishes to staff and patients there.