Bulk of oil wealth to trickle down to ordinary Guyanese -Granger 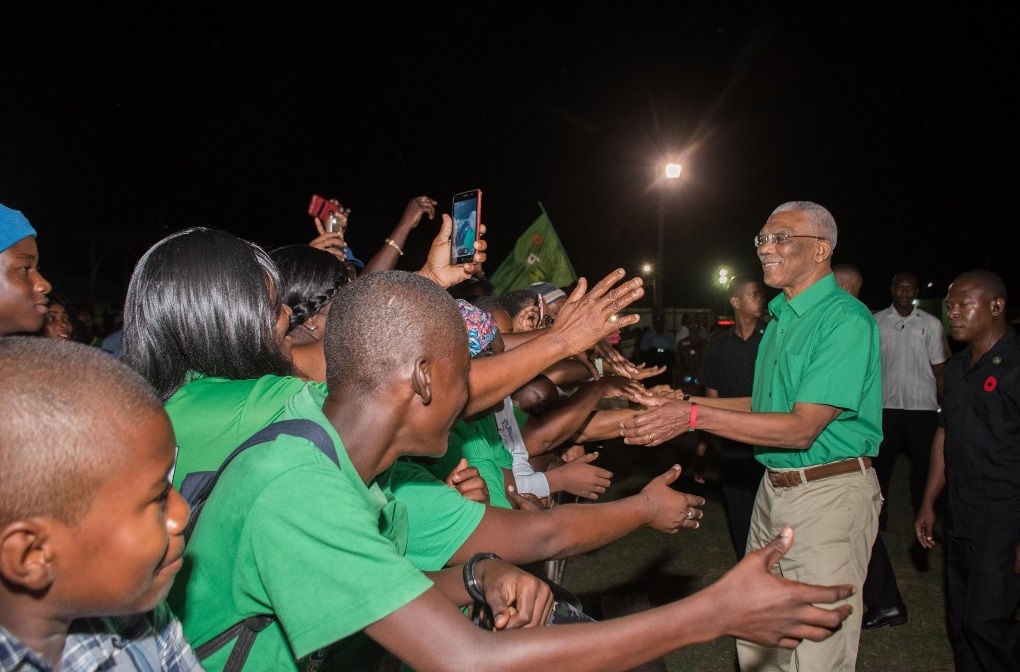 President David Granger promises that the bulk of Guyana’s oil revenues will trickle down to ordinary people and some will be used to revive the country’s village economies and social programmes.

“We will put the benefit, we will put the profit, we will put the better part of that petroleum revenue to ensure that your children will never be poor again,” he said to applause by thousands of attendees at an event to mark the 180th anniversary of the purchase of Plantation Northbrook, now Victoria Village, by freed Africans with their earnings.

But, he stayed clear of any reference to the controversial direct cash-transfer scheme that has been proposed by the Working People’s Alliance (WPA). Mr. Granger, however, continues his crusade of delivering high quality free education from nursery to university during his proposed Decade of Development 2020 to 2029.

Mr. Granger said Guyanese were entitled to their patrimony. “You the people of Guyana, you work for it, you deserve it, you own it and we’ll ensure that petroleum profits benefit you first and foremost,” he said.

The WPA, according to sources, was due to brief a group of government officials on the need for annual direct cash-transfers of about US$5,000 to each of the more than 200,000 households as a way of combatting income poverty. But detractors have frowned on the idea first publicly proposed two years ago by WPA executive member, Distinguished Economics Professor, Clive Thomas, arguing that it is a recipe for laziness and dependency.

President Granger sought to assure attendees at the Victoria Village event that his proposed Village Improvement Plans and Decade of Development initiatives are not election gimmicks. “So, my friends, this Decade of Development is not an election device. It is a serious plan to move Guyana forward into the ranks of the developed nations,” he said to a clearly politically motivated audience.

The overwhelming majority of the attendees wore green T-shirts emblazoned with the logos of Granger’s People’s National Congress Reform-dominated A Partnership for National Unity (APNU) and the Alliance For Change. Several hundreds of them were bussed in from Berbice, East Bank, West Demerara, and East Coast Demerara villages.