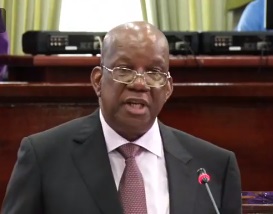 Finance Minister, Winston Jordan says the governing coalition’s general election campaign will not be pegged on the immediate benefits of oil money next year, but will list a number of tax concessions leading up to 2025 as more oil revenues pour in.

He says lower individual, corporate, value-added and other taxes will find their way into the manifesto of the governing A Partnership for National Unity+Alliance For Change (APNU+AFC) coalition for the March 2, 2020 general and regional administrative council elections.

“You could expect lower taxes all round,” said Jordan, a former Budget Director at the Ministry of Finance. “Several thinking will be in the manifesto and those will be turned into measures and legislation post-elections.

He remarked that the 2020 budget would be presented around August, and Guyanese could begin receiving some benefits in 2021.

He said the agricultural sector would be incentivised to reduce Guyana’s dependence on oil, and money would be also set aside for clean energy and the environment.

Asked whether US$300 million in earnings from oil next year would be sufficient to compensate for the loss government would be giving up in taxes, he said that was why government was cautious about what “we say and when the implementation will take place. “You are talking about a five-year manifesto; it’s not a 2020 manifesto, it’s a five-year manifesto,” the Finance Minister said.

Mr. Jordan says Guyana’s expected earnings from oil next year will be about US$300 million from Liza Phase 1 which will produce about 120,000 barrels of oil per day.

The opposition People’s Progressive Party (PPP) and the Working People’s Alliance (WPA) are already on record as saying that direct cash-transfers and other large scale spending from next year’s oil revenues will not be possible.

They all agree that the bulk of the oil money will begin pouring in around 2025 as more oil wells are brought into commercial oil production. So far, Tullow and ExxonMobil have discovered more than 7 billion barrels of oil equivalent.