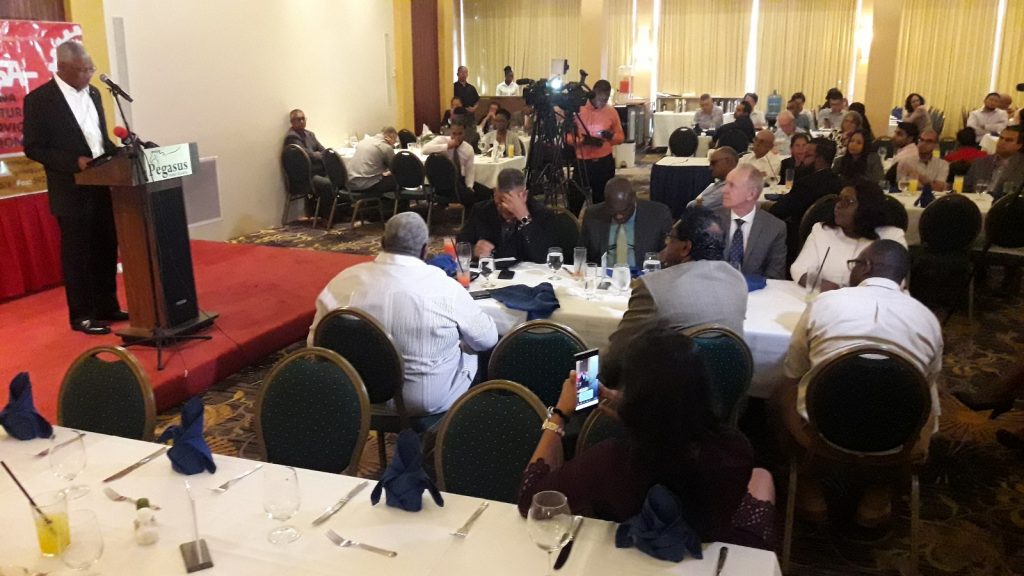 The Guyana Manufacturers and Services Association (GMSA) on Friday apologised to President David Granger for the “bad manners” protest by opposition People’s Progressive Party Civic (PPPC) supporters while he was addressing that business organisation’s luncheon.

“Our Executive Board wishes to express its sincerest apology to you for the distressing public display of bad manners exhibited, with the obvious intention of disrupting our luncheon,” the GMSA said in a letter that was dispatched to Granger.

PPP supporters Juan Edghill, Nigel Dharamlall and Peter Ramsaroop were among a group who took out big pamphlets that they sneaked into the Savannah Suite, hoisted and chanted “illegal government, illegal government”. While the noise drowned the President’s voice and forced him to suspend his presentation, he stopped short of saying that such “hooliganism” could have a ripple effect.

Speaking in Port Kaituma on Friday, the President made it clear that the protesters alleged attempt to topple a vehicle with Minister of Foreign Affairs, Dr. Karen Cummings would not go unpaid. “The People’s Progressive Party organised a demonstration and my Minister of Foreign Affairs was going to that meeting. They tried to turn the car over. That is hooliganism and somebody will pay for that,” he said. Public Infrastructure Minister, David Patterson was also blocked, encircled and followed by several opposition protesters as he attempted to enter the Pegasus Hotel.

Noting that the obvious intention was to disrupt its business luncheon, the private sector organisation said the People’s Progressive Party’s behavior on Thursday “was an outright affront to the GMSA’s belief in fairness, impartiality and openness to all opinions in Guyana.”

The GMSA thanked the President for remaining steadfast in his intention to speak to the business community on relevant policies and strategies of his government. The association assured the President that “your speech was well received by our audience.”

“Our Association prides itself as a responsible member of the Private Sector with a mandate to interact with the Government of the day, irrespective of Party allegiance, in enhancing a necessary partnership towards the process of social and economic development. We fully accept the concept of public protest within a democratic context, but cannot condone protestors using the confines of private property to voice their concerns in such a boisterous and unruly manner,” GMSA President Clinton Williams said.

Meanwhile, the People’s Progressive Party Civic’s Juan Edghill called the President “petty” and labelled him a “hooligan”, in apparent reaction to the the Guyanese leader’s characterisation of the protest outside and inside the Pegasus. “It would appear that the President was personally upset that he was protested yesterday, even though he was forewarned . I don’t know why he is upset. It shows how thin-skinned and petty he is and that’s the language that we need to use. He’s thin-skinned and petty and I would like to say to the President ‘stop pontificating, stop pontificating, wake up to reality'”, he said.

The PPP said the Granger-led administration has become illegal after September 18 and its General Secretary, Bharrat Jagdeo has warned the President that he would face peaceful protests wherever he goes.

Riot police, in full battle gear, were deployed Thursday outside the Pegasus Hotel, but did not go into action as the supporters dispersed voluntarily.

Earlier Friday, the Ministry of the Presidency hinted that security for the President and ministers would be tightened and that the Granger administration would not tolerate “hooliganism and thuggery”. ” “The President assures all Guyanese that every lawful measure will be taken to guarantee the safety of Ministers of Government and to prevent a breakdown of law and order in the country. The Opposition’s undemocratic behaviour and its continuous threats to peace and stability, has no place in this society and will not be tolerated,” the President’s office said.