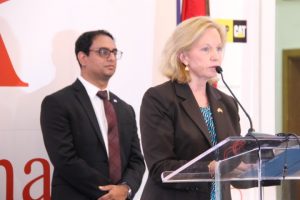 Senior Vice President of the Georgetown Chamber, Timothy Tucker indicated that Ms. Lynch is an American public servant who was merely representing her country’s business interests.

Mr. Tucker says nothing is wrong with the Chamber being pro-local content in the same way US President, Donald Trump is backing American businesses. “The co-chair is a public servant in her country and she has to do what is best for her country and her country’s businesses,” she said.

“I understand that she has to protect her investors and companies from that country that is coming. We all see that her President is very pro-local content for her country so we are very well on track with being pro-local content,” said Tucker as he was pushing the planned Business Development Forum which is geared at helping small businesses find other sources of financing.

The Business Development Forum is being co-supported by the Inter-American Development Bank, Ansa McAl and the Ministry of Business.

At the event, which will be held at the Pegasus Hotel from September 27 to 28, participants will also be taught to use various online tools to market their businesses on social media.

The US Ambassador had also highlighted the need for Guyanese businesses to adhere to a range of internationally recognised companies so that they could successfully bid for contracts alongside international companies.