PPP presses for elections in October 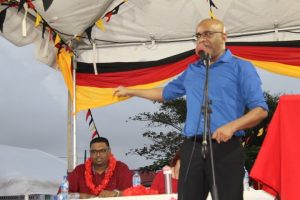 Opposition Leader, Bharrat Jagdeo on Wednesday believed that the governing coalition’s plot to “sanitise” his party’s supporters from the voters’ list has been foiled by a recent High Court ruling that no one can be removed from the National Register of Registrants.

“They wanted to sanitise a lot of us from the list so when election day comes a lot of us would have been sanitised and we won’t have had the right to vote but the ruling thwarted their plan to sanitise out of voting and they are in that little panic mode,” he said.

Jagdeo instead called on the Guyana Elections Commission (GECOM) to immediately move to the claims and objections period for the national register and the eventual extraction of names to create a new voters’ list.

With mid-December being touted in several circles as the period around which President David Granger is expected to name an elections date, the Opposition Leader said general and regional administrative council elections could be held much earlier. “I believe that October is a timeline because the commissioners sat and they worked at this and showed that without compromising any quality we can achieve this by the end of October,” he said.

His position came one day after the three pro-opposition party and three pro-governing coalition elections commissioners emerged from a three-hour long meeting with the GECOM Chairperson. They discussed the recent judgement by Chief Justice, Roxane George-Wiltshire that essentially states that house-to-house registration as a verification exercise is not illegal or unconstitutional, and the names of registrants could not be legally or constitutionally removed from the register except by death or loss of citizenship.

Governing coalition elections commissioner, Vincent Alexander on Wednesday suggested that claims and objections would be used even if it is from data acquired from house-to-house registration or the existing National Register of Registrants.

Alexander conceded that engaging the Chief Immigration Officer to remove the names of Guyanese residing permanently overseas would take a long time.

Elections had been constitutionally due the latest by August 2020. But, all that changed last year December when government parliamentarian Charrandass Persaud sided with the PPP to pass a no-confidence motion 33-32 in the 65-seat National Assembly.

The constitution states that elections must be held within three months after the passage of a no-confidence motion. President Granger has agreed with the Caribbean Court of Justice that he is in charge of a caretaker administration that cannot ink massive deals, privatise state assets or pass a national budget.

The 2019 National Budget expires on December 31.