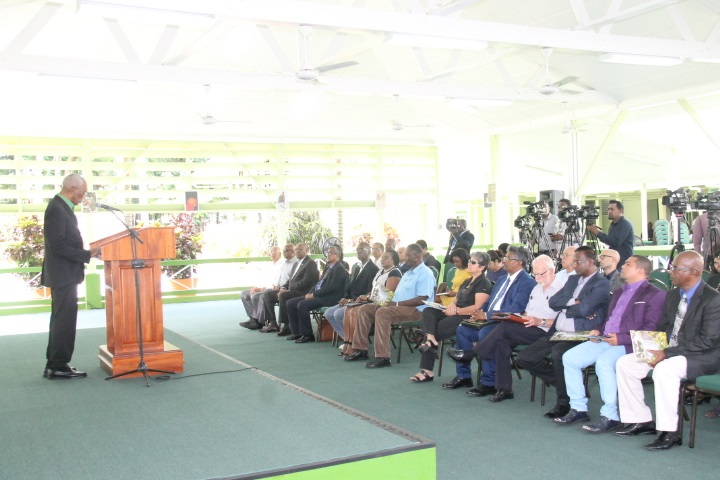 President David Granger addressing members of the private sector, civil society and religious organisations at State House on the political situation in Guyana.

President David Granger on Thursday stressed that the court could not instruct when general elections must be held because the Guyana Elections Commission (GECOM) is an independent agency and that his administration remained committed to “free, fair and credible” elections with an acceptable voters’ list.

“The President cannot tell the Elections Commission (when elections) must be held; neither can the courts,” he told representatives of the private sector, religious organisations and trade unions at State House. He said there are no deadlines or timelines and there is no date for Guyanese to return to the polls to elect a government of its choice.

Granger made known his position a day after Chief Justice Roxane George-Wiltshire said the Caribbean Court of Justice (CCJ) indicated that polling day should be no later than September 18 or a new date if set by two-thirds of the Parliament.

Meanwhile, Opposition Leader Bharrat Jagdeo, in a swift response, criticised the President for seemingly intimidating the judiciary. “It’s impossible to take a President who is so ill-advised seriously. He should familiarize himself with the Esther Perreira case in which the court actually ordered elections by a certain date. In this case the Constitution sets the timeframe for elections when a government is defeated on a vote of no confidence. GECOM was a party to the proceedings in the court and the CCJ orders are binding on it. I interpret his comments as intending to intimidate the Judiciary and reveals an authoritarian instinct. The president who says he respects the rule of law is now telling a separate, independent branch of government what it cannot do.”

The Chief Justice refused Christopher Ram’s request for a conservatory order to stop the house-to-house registration process that began on July 20 for a lack of evidence. However, she is accepting submissions from lawyers representing government, GECOM and Ram on arguments that the registration process is unconstitutional and will collide with the three-month timeframe within which general elections must be called upon the successful passage of a no-confidence motion. The motion was passed on December 21, 2018, and after a long-running legal battle, the Caribbean Court of Justice on June 18 ruled that it was validly passed by a majority of 33 to 32 votes.

President of the Georgetown Chamber of Commerce and Industry Nicholas Deygoo-Boyer was comforted by the fact that the Guyanese leader acknowledged government’s interim status. The business executive said he was, however, concerned that the President’s position conflicted with the Chief Justice’s over the timeframe within which elections must be held.

“It causes some concern because there are two conflicting interpretations. That’s something I want to discuss with more people and get some more opinions,” he said in response to questions by Demerara Waves Online News.

The CCJ had declined to issue conservatory orders such as a date by which general elections should be held, only saying that Guyana’s constitution lays down roles for the President, Opposition Leader, Parliament and GECOM in arriving at a date for polling.

Boyer and GTUC General Secretary, Lincoln Lewis preferred to analyse the President’s address before giving a full reaction in writing. GTUC President, Coretta McDonald expressed disappointment that the President left immediately after addressing the attendees. McDonald said she went to the meeting with questions she had intended to ask the Guyanese leader but instead he left without an interactive session.

“While clarification was brought to some of the issues, we were left halfway, we were like shocked because we came here with the expectation that we were going to be able to ask questions and to have some other issues being clarified but the intention of the President was not to answer questions,” she said. McDonald declined to divulge the questions she came ready to ask.

While the President repeatedly stressed that the Elections Commission has “total control of the electoral process”, he contended that the credibility of the general elections partly depends on the integrity of the voters’ list because “a corrupted or contaminated list can undermine the electoral process, encourage mischief and malpractice and result in the elections being nullified.”

“The proclamation of an unrealistic date for elections or the adoption of an unacceptable official list of electors will impair the credibility of the elections,” he said. Then GECOM Chairman, James Patterson and the pro-government elections commissioners had agreed that house-to-house registration should be conducted before the next general elections.