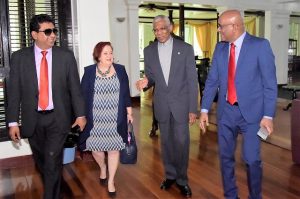 Opposition Leader Bharrat Jagdeo Monday night said he was prepared to nominate more persons for the post of Guyana Elections Commission (GECOM) Chairman, but threatened to pull out of talks with President David Granger if there is bad faith.

“We are acting in good faith but if the government does not act in good faith, then we will be put in a situation where we will have not to participate in this process,” Gail Teixeira told a news briefing.

Attorney-at-Law Anil Nandlall, who is one Jagdeo’s representatives in the talks, gave government an ultimatum for committing to consider Jagdeo’s nominees. “That does not augur well for the continuation of the process…we will not be persuaded that the government is acting in good faith”, he said.

Nandlall came very close to saying that Granger’s suggested names are aligned to the People’s National Congress Reform, the largest party in the governing coalition. “Look at those names of persons who are highly politically connected to the government,” he said.

Through his representatives—Juan Edghill, Gail Teixeira and Anil Nandlall—Jagdeo lamented Granger’s refusal to consider his 11 nominees but instead submitted eight names.

“Without the President offering an objection where we could bring six of the eleven, we don’t see the need for eight other names,” Edghill said.

Teixeira and Nandlall lamented that Jagdeo’s nominees were dispatched to the Ministry of the Presidency since Saturday afternoon. They highlighted that the Opposition Leader is not constitutionally bound to give reasons for refusing names floated by the President. The Caribbean Court of Justice, in declaring Granger’s unilateral appointment of Patterson as unconstitutional, has said the President is obliged to give reasons in keeping with transparency and openness.

The two sides are due to meet again on Tuesday when they might consider all 19 names.

Previous: President submits James Patterson, 7 others for GECOM Chair
Next: OPINION: Coalition list is synonymous with an overflowing sewage system