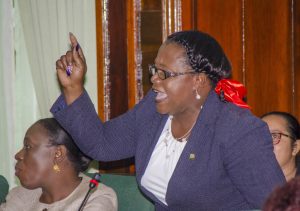 High-level government political leaders are reportedly taken aback that her absence could have been interpreted as somewhat disrespectful to the Guyanese leader, especially since she is very popular and active in that town as a gold miner and a campaigner against trafficking in persons.

Broomes did not answer or return calls made to her cellular phone, but government sources said she has since expressed concern in writing about the way she perceives she is being treated. It was not immediately clear whether she has suggested that she might be better off resigning rather than enduring limitations in performing her duties.

Recently transferred from the Ministry of Natural Resources to the Ministry of the Presidency and assigned responsibility for Youth Affairs, Broomes is reportedly upset that she has been merely given an office, desk and chair with no resources to execute her duties.

President Granger had made it clear during her reassignment that Minister of Social Cohesion Dr. George Norton would still be responsible for the youth portfolio.

Since A Partnership for National Unity+Alliance For Change (APNU+AFC) coalition came to power in May 2015, Broomes has had brief stints at the Ministry of Social Protection and the Ministry of Natural Resources.

Sources said that while Broomes has not been found to be corrupt, there are concerns about claims that she spends extravagantly on ministerial visits especially to out of Georgetown and in the interior. Broomes’ family continues to have business interests in gold mining and river transportation in Region 7 (Cuyuni-Mazaruni)

At the same, government sources credit her with being on the ground meeting with ordinary people regardless of which ministerial portfolio she is assigned.

Broomes had featured in a public spat at an East Bank Demerara parking lot, and a Facebook ‘boom-out’ video recording in the National Assembly which had not found favour with House Speaker Dr. Barton Scotland.