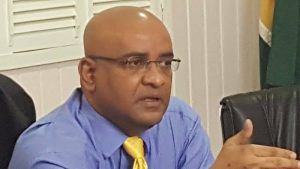 Opposition Leader, Bharrat Jagdeo on Monday ruled out agreeing to extending the deadline by which general elections should be held, hours after a lawyer for the Guyana Elections Commission (GECOM) told the Caribbean Court of Justice (CCJ) that a new house-to-house-generated voters list would not be ready until December 25.

“What is non-negotiable is I going back to Parliament to extend the life of this government,” Jagdeo told a news conference. He also reiterated that a new GECOM Chairman has to be appointed to replace James Patterson. The regional court found that President Granger’s unilateral appointment of Patterson was flawed and unconstitutional because the Guyanese leader had rejected Jagdeo’s 18 nominees without giving reasons.

“We are open-minded in our discussions with the President but there are some red lines we won’t cross” Jagdeo stated.

He appeared willing to meet with the President, a desire by the CCJ to reach consensus on the consequential orders that should flow from last week’s decisions that the December 21, 2018 no-confidence motion was validly passed and the GECOM Chairman’s appointment flouted the constitution. Jagdeo said he would be seeking clarification from Director-General of the Ministry of the Presidency, Joseph Harmon about whether Granger was still willing to meet in the absence of the CCJ’s orders.

The Trinidad-based CCJ on Monday said it would hand down its consequential orders next month which would seek to strike a balance between the 90-day timeframe within which general elections should be held after a no-confidence motion is passed by the National Assembly, and the need to have fair elections in which the majority of Guyanese can participate.

Insisting that the existing voters’ list, which expired on April 30, could be revived and subjected to a claims and objections period to allow for elections to be held in August or September, Jagdeo feared that “if we go to house-to-house, it (general elections) wouldn’t even be December”.

Attorney General, Basil Williams on Monday told the CCJ that Guyana’s Executive President enjoys the power to consult with GECOM, dissolve Parliament and name an elections date. He wants the CCJ to issue an order that would facilitate the President doing so.

“If there is no agreement, for example, to go for the two-thirds resolution because our belief respectfully is that those three months have been overtaken; whether they are directory or mandatory, they have been overtaken and, therefore, if we can’t get together in the Parliament to get the two-thirds majority, then of necessity, the President, being given the power under the constitution to name an election date and dissolve Parliament, should—and this is the order—should have consultations with the Elections Commission, dissolve the National Assembly and general and regional elections should be fixed by the President,” Williams said.

A New and United Guyana (ANUG) political party at the weekend pointed out that the seven-member elections commission had never decided on house-to-house registration. Instead, that party said it was the pro-coalition’s three elections commissioners and the now unconstitutionally-appointed GECOM Chairman that had voted for such a process to create a new voters’ list. In light of that Chairman’s status, ANUG says that decision was void.