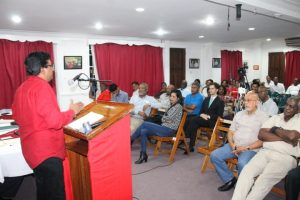 Former Attorney General, Anil Nandlall delivering a presentation at a public forum on the “CCJ’s rulings and their implications for Guyana” organised by the Cheddi Jagan Research Centre.

Lawyers for Opposition Leader, Bharrat Jagdeo and allied parties are proposing that the Caribbean Court of Justice (CCJ) issue orders to allow for specific timeframes for appointing a new Chairman of the Guyana Elections Commission (GECOM), and the holding of general elections within 90 days with the existing voters’ list.

They made the disclosure on Friday at a public forum on the “CCJ’s rulings and their implications for Guyana” organised by the Cheddi Jagan Research Centre and held at Red House, Kingston.

Nandlall explained that the orders proposed to the Guyana government’s lead attorney, Belize Senior Counsel Eamon Courtenay, seeks the CCJ’s involvement in setting timeframes within which Opposition Leader Jagdeo’s six nominees for the post of GECOM Chairman should be submitted, within which the appointment must be made and liberty to apply to the court if the orders are not implemented reasonably. Ramkarran was confident that the CCJ would intervene if any of the parties do not heed the orders. 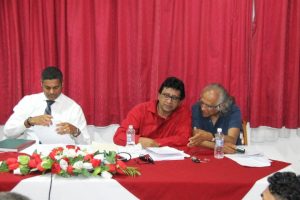 Nandlall told the well-attended event that he and his legal team are arguing for use of the voters’ list that should have been used to conduct elections by March 21 when the original 90 days from the passage of the no-confidence motion had expired. “Any other list that will be used will be subject to jiggery-pokery,” he said.

The former Attorney General said he and his legal team would be going to the CCJ to point out the illegality of countrywide house-to-house registration to create a new database because since 2005 the law had been amended to empower the Chief Elections Officer to allow for registration cycles using the 2001 database as the basis.

Ramkarran stressed that house-to-house registration was not constitutionally possible within the 90-day period during which elections should be held after a no-confidence motion is passed, unless the parties agree to an extension by a two-thirds majority. “It has to be held right away with whatever list you have….It seems to me that you can have a claims and objections period for two weeks, even three weeks,” he said, adding that that process would allow people to be removed and added to the list. “It seems to me that that is not too difficult to do.”

Ram slammed President Granger’s assertion that there are about 200,000 defective names on the voters’ list and that 18-year-old persons would be excluded from voting because their names are not on the national register. He said there was no evidence of a scientific test, desktop or informal survey to prove the claim. “This business that Granger is talking about is mischievous and is dangerous and is malicious,” he said, suggesting that the President was probably getting bad advice. 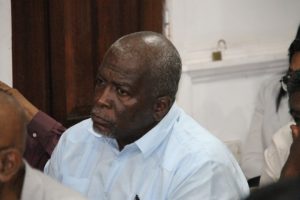 GECOM has a “robust” claims and objections period, party polling agents, independent observers, use of indelible ink, provision of folios to party polling agents and accounting for used and unused ballots. “All these measures have been put in place so this thing about, ‘we want free and fair elections’, we’d had them. What you’re trying to do is to create an unfair and fraudulent election. That’s the whole idea behind this objection to the NCM (no-confidence motion),” Ram said.

The CCJ has ruled that the no-confidence motion was validly passed on December 21, 2018 after then government parliamentarian, Charrandass Persaud had voted for the Jagdeo-sponsored motion. The Trinidad-headquartered court, which is enshrined in Guyana’s constitution, also ruled that President David Granger’s unilateral appointment of James Patterson as GECOM Chairman without giving reasons for rejecting Jagdeo’s 18 nominees was flawed and unconstitutional.

Instead the CCJ says the Opposition Leader must first discuss his nominees with the President and after they have agreed on the list, it would be formally dispatched to the Guyanese leader who would then pick one name to chair the seven-member elections commission.

Previous: Coalition preparing for Court again if GECOM blocked from creating clean voters’ list
Next: OPINION: What was feared already coming to a head