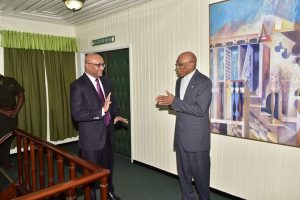 Opposition Leader, Bharrat Jagdeo on Thursday accused President David Granger of lying to the nation by claiming that youths who recently turned 18 years would be unable to vote to justify the Guyanese leader’s insistence on house-to-house registration to create a fresh voters’ list before the next general elections.

“This is a total lie. It’s beneath the President to so flagrantly lie to the people of our country. It’s a flagrant lie so this is to stir up anger among young people who are not going to be on the list, are going to be disenfranchised, et cetera;” Jagdeo said at a press conference on Thursday.

Pushing for general elections to be held within three months now that the Caribbean Court of Justice (CCJ) has ruled that last December’s no-confidence motion was valid, Jagdeo argued that the last two cycles of registration of those who had become 14 years since 2015 has already captured those who have now attained voting age and so their names have been transferred on the voters’ list. He contended that the figures are showing that a lot of government supporters have not registered in those two registration cycles.

The Opposition Leader said the Representation of the People’s Act could allow for the revival of the voters’ list that expired on April 30 after which a short claims and objections period could be opened to allow for changes such as removing the names of deceased persons, and changes of names among other possible objections.

“This is extremely generous to APNU (A Partnership for National Unity),” he said.

Jagdeo again accused President Granger of using the need for house-to-house registration as a “ploy to delay the election”.

Meanwhile, the Opposition Leader said he was ready to submit a list of six nominees for the post of Chairman of the Guyana Elections Commission (GECOM) because the CCJ has ruled that Granger’s unilateral appointment of James Patterson was “flawed” and unconstitutional.

The CCJ said, “The President should only find a nominee unacceptable for some good reason on objective grounds. If a President were permitted, capriciously or whimsically, without proffering a good reason, to reject eligible nominees, this would frustrate the proper working of the Constitution, defeat the intention behind the amendment to Article 161 (2) and pave the way for unilateral presidential appointment.”

Jagdeo also told the press conference that he has been briefing foreign diplomats about the People’s Progressive Party’s position going forward and the alleged use of “inflammatory language to polarise the country once again”.

The CCJ is next Monday expected to issue orders arising from its judgements that the GECOM Chairman’s appointment was unconstitutional and the no-confidence motion was validly passed.

Ordinarily after a no-confidence motion is passed, elections must be held within three months.