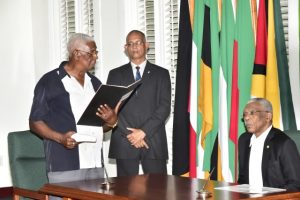 Flashback: Desmond Trotman taking the oath of office as Elections Commissioner before President David Granger at State House on November 24, 2017.

The Guyana Elections Commission’s (GECOM) Legal Officer, Excellence Dazzell has told the bipartisan seven-member body that the voters’ list that expired last month-end should be revised and the law does not provide for a new voters’ roll to be created, advice that at least one ruling coalition commissioner has condemned as an act of “deceit”.

The opinion, which was seen by Demerara Waves Online News, recommends that the electoral  commission advise the Commissioner of Registration, Keith Lowenfield, who is also the Chief Elections Officer, to set the machinery in place to extend the life of the voters’ list.

“I, therefore, advise that procedures be put in place to ensure the revision of the list, otherwise the commission would be acting in defiance of the law and may prejudice any by-election that may become necessary,” she told the GECOM Chairman, Commissioners and the Chief Elections Officer.

In her opinion, Attorney-at-law Dazzel does not see the need for a new voters’ list. “The use of the word “revise” suggests that the process is not one where a “new’ list is generated but one where the most recent list is updated or amended,” she said.

Her opinion, dated May 13, comes at a time when the Caribbean Court of Justice (CCJ) is preparing to hand down its decision on the validity of the December 21, 2018 no-confidence motion that might necessitate early general elections.

Pro-coalition elections commissioner, Desmond Trotman has since accused Dazzell of deceit, claiming that she had never before informed the Commission that she had drafted a legal opinion. Trotman and his two government-backed commissioner colleagues, Vincent Alexander, Charles Corbin, and GECOM Chairman James Pattterson have agreed that house-to-house registration must be conducted to extract a new voters’ list by November, 2019.

Trotman noted that the Opposition-backed elections commissioner, Bibi Shadick had long called for Dazzell to issue an opinion, but the Commission had never collectively decided that she should have done so.

Shadick and fellow pro-Opposition commissioners, Sase Gunraj and  Robeson Benn, as well as their People’s Progressive Party, are opposed to house-to-house registration for a new voters’ list. GECOM’s move to conduct the registration has been challenged by an overseas-based Guyanese, through her lawyers who include Anil Nandlall of the PPP.