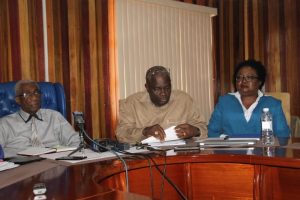 A private citizen has asked the High Court to quash planned house-to-house registration by the Guyana Elections Commission’s (GECOM) on the grounds that it is unconstitutional.

Bibi Zenatoun, through her lawyer, Anil Nandlall, wants an injunction and a conservatory order to block the registration process which is expected to begin around June.

“I am advised by my Attorneys-at-Law and do verily believe that there are no laws that require proof of residency in Guyana as being an element of qualification for registration to the National Register of Registrants.

I am advised by my Attorneys-at-Law and do verily believe that I am a registered elector in Guyana and during the Respondents’ present proposed House to House Registration exercise, I will be excluded and will cease to be a registered elector and will be denied the opportunity and right to vote in any upcoming elections in Guyana,” she said in court papers.

GECOM is pushing ahead with plans to conduct the house-to-house registration process to create a new National Register of Registrants from which will be extracted a new voters’ list.

In court papers seen by Demerara Waves Online News, Zenatoun says she is a pensioner, and a registered elector in Guyana.

The applicant has an adult son who resides in Guyana along with his two children, and for seven months during the year, she returns to Guyana to help care for her grandchildren and guide them in their academic studies.

Zenatoun, who says she has voted in elections in Guyana as recent as the 2018 Local Government Elections, became aware through the news media that she could potentially lose her right to vote through house-to-house registration.

“The Applicant will be absent from Guyana for a period of five months commencing from the end of May 2019 and will therefore not be at her local place of residence (in person) during the period being proposed by GECOM to conduct the said House to House Registration,” her lawyer said.

Her lawyers said there is no provision for house-to-house registration, but provision is made for continuous registration in keeping with a 2005 amendment of the National Registration Act to “ensure that all eligible persons are afforded unlimited opportunities to become registered on the National Register of Registrants Database” and ensuring that “GECOM is in a perpetual state of preparedness which would enable it to respond to calls for elections in a timely manner thus guaranteeing eligible persons their Constitutional right to become registered in accordance with the relevant legal provisions and to cast their ballots at future General, Regional and Local Government Elections.”

Government-backed elections commissioners Vincent Alexander, Charles Corbin and Desmond Trotman and GECOM Chairman, James Patterson have voted in favour of house-to-house registration. Alexander had expressed concern over an apparent large number of names of emigrants who are still on the voters’ list rather than the names of deceased persons.

The GECOM Chairman has already told President David Granger that GECOM could be ready to hold General and Regional Elections in November 2019 after house-to-house registration.