Fungus-infected manganese mine workers did not wear safety gear 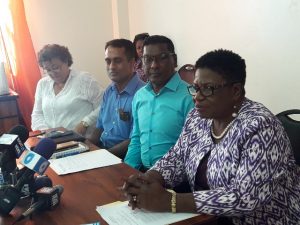 Government’s Occupational Safety and Health (OSH) Department on Monday said the Chinese manganese mine workers did not use protective gears while clearing a tunnel laden with the histoplasmosis fungus that claimed two lives and sickened 12 others.

The histoplasmosis fungus is said to be associated with decayed bat droppings.

The Environmental Protection Agency (EPA) said no green-light would be given for work to resume until a full assessment of the site has been done.

She declined to say whether the Guyana Manganese Incorporated (GMI) would be punished as a report was being finalised.

The GMI, she said, informed authorities that the protective gear was at a wharf in Guyana awaiting customs clearance, but she did not verify whether that was so.

King said workers performing such duties should have worn personal protective equipment or risked exposing themselves.

One Guyanese was also afflicted by the fungal infection, which if inhaled over a long period, could eventually prove fatal especially in persons with weakened immune systems.

Two other persons were up to Monday in-patients at the Pakero District Hospital. China has since evacuated 10 of its nationals who were in recovery.

Chief Medical Officer, Dr. Shamdeo Persaud said initially the Georgetown Public Hospital had said two Chinese nationals died due to leptospirosis-related complications. However, tests done by the Caribbean Public Health Agency and the United States and China disease control centres confirmed that the cause of the illness was histoplasmosis.

Persaud said the cumulative exposure by the mine workers ranged from four minutes to 84 hours over 10 days. He said the two who died were among those who had spent a longer time in the tunnel. “It definitely indicated that longer periods of exposure in the tunnel were the ones most likely to come down with severe disease at risk and to make the assumption that it was really a dose-dependent exposure,” he said

He said one of 23 workers interviewed indicated that he had a mask.

Noting that one of the challenges facing OSH inspectors was the difficulty getting to mining locations, King said her department had not been aware that GMI had been engaging in mining operations. The Department has 10 of the required 15 staff members.

EPA Senior Environmental Officer, Camille Adams said work at the manganese mine would not be allowed to restart until a full assessment is conducted. “We will have to ensure that when we get the complete assessment done in the area. That will then determine what goes forward,” she said.

Adams said the manganese mine was undergoing the authorisation process when news broke over two weeks ago that a number of the workers had been sickened by an unidentified condition. She disclosed that GMI officials had visited the EPA on March 12 to discuss what they could have done before the assessment had been completed. “They were permitted to do some rudimentary works in the area, not mining,” she said, adding that involved clearing vegetation to open up the area for the next stage and construct a workshop.

Adams said the EPA collaborates with the Ministry of Agriculture, Guyana Geology and Mines Commission and the Ministry of Public Health as well as other stakeholders to allow them an opportunity to include their views.

The Chief Medical Officer said the Ministry of Public Health had tracked down the travel route of the Chinese workers who had arrived in Guyana through neighbouring Suriname where there had been a report of H1N1.