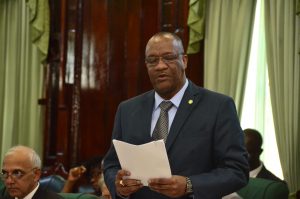 Minister of State, Joseph Harmon on Friday said government would not be removing its dual citizenship Members of Parliament (MPs) yet and they will all be present in the National Assembly at its next sitting on April 11.

Harmon, himself a Guyanese-American, suggested that government would await the decisions of the Caribbean Court of Justice (CCJ) on the no-confidence motion before determining the fate of dual nationals in the House.

He said Attorneys-at-law representing the State would advise government with respect to the state of the parliamentarians who are dual nationals.

He also rebuffed accusations by Opposition Leader Bharrat Jagdeo that government appeared to be abiding by the Guyana Court of Appeal in a piecemeal fashion – recognising the invalidation of the no-confidence motion because it was not passed by an absolute majority of 34 votes but not the unconstitutionality of dual nationals as candidates and parliamentarians.

“I see nothing duplicitous about it,” said Harmon. He reiterated that government would abide by the CCJ’s pronouncement. In addition to Harmon, the other dual citizenship MPs are Guyanese-Britons Carl Greenidge, Rupert Roopnaraine and Dominic Gaskin.

The opposition People’s Progressive Party has said it would not be attending sittings of the National Assembly until the CCJ rules. However, two of their lawmakers – Guyanese-Canadian Gail Teixeira and Guyanese-American Odinga Lumumba – had declared that they would be renouncing their dual citizenship.

Apparently Adrian Annamayah has not made up his mind as yet.