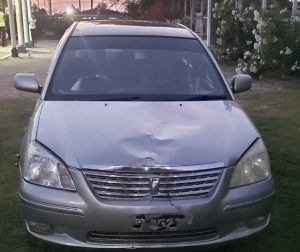 A six-year pupil of Eversham Primary School, Corentyne, Berbice, was killed after she ran out from behind a lorry and was struck down by a car, the Guyana Police Force said.

The child was identified as Arianna Lowenfield with a given address as Epson Village, Corentyne.

The car that struck her bears licence number HC 2523 and was being driven a 33-year old man of 79 Village, Corentyne, Berbice.

Investigators were informed that at about 3:20 Tuesday afternoon, “the hire car was proceeding south along the eastern side of the road and whilst in the vicinity of Eversham Bridge, the pedestrian suddenly ran from west to east from behind a lorry that was proceeding north and came into contact with the front centre of the hire car.

Lowenfield was picked up in an unconscious condition and taken to Port Mourant Hospital where she was pronounced dead on arrival. The driver was arrested and taken into custody at Number 51 Police Station. He was given a breathalyzer test and no trace of alcohol was found.

Previous: Gov’t will seek House-approved funds for polls ahead of CCJ decision
Next: Private sector, Granger at odds over impact of political uncertainty on businesses