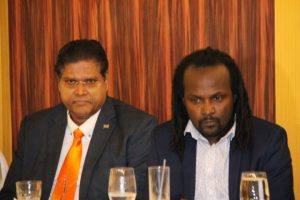 President of the Transparency Institute of Guyana Inc. (TIGI), Dr. Troy Thomas wants asset declarations by the President and Opposition Leader to the Integrity Commission to be published.

“We have discussed at some point that at least the declarations by the President and the Leader of the Opposition should be made public. We can discuss and argue about the others and to what extent we should but we should at least do that,” he told TIGI’s annual fundraising dinner held Saturday night at the Pegasus Hotel.

He said if the Integrity Commission Act is amended to allow for the declared assets of the country’s two leading politicians to be made public, that would bring Guyana on par with practices in a number of other Caribbean countries.

Thomas applauded the Integrity Commission for publishing the names of public officials who have not filed asset declarations with that anti-corruption mechanism.

Touching on the anti-corruption cases in court, he expressed concern that no one has been convicted in connection with any of the numerous forensic audits that had been conducted by the State in 2016. “Nobody has been convicted as a result of the findings of the forensic audits that were done post-2015 change in government,” he said. He believed that Guyanese were not too optimistic about any of those corruption-related cases because the first one was lost.

On the fate of the Commissioner of Information, Retired Justice of Appeal Charles Ramson, the TIGI President noted that he had been fired and no funds were budgeted for the Commissioner’s office in 2019. Thomas said that amounted to a “backward step because perhaps it wasn’t working now but now it’s not going to work at all”.

“In terms of transparency, that’s something that needs to be addressed,” he said.

Thomas also gave the incumbent coalition almost zero marks for failing to draft or table campaign financing legislation. “This seems so far to be a broken promise and I would rather suspect that I would continue to call it an outstanding issue in relation to addressing corruption,” the TIGI President said. 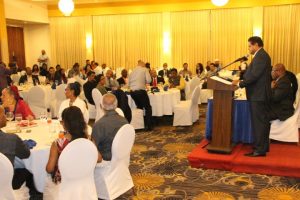 He also objected to remarks that had been made by President David Granger and Opposition Leader Bharrat Jagdeo about the High Court and the Caribbean Court of Justice (CCJ). Thomas reflected on President Granger’s reaction to a section of Chief Justice Roxane George-Wiltshire’s decision that the Guyanese leader ought to have explained his rejection of Jagdeo’s 18 nominees for the post of Chairman of the Guyana Elections Commission (GECOM).

The TIGI President recalled Granger saying that Justice George had her interpretation and he had his.  Similarly Jagdeo’s remarks last October that the CCJ’s credibility would be at stake if it upholds Guyanese court decisions that Granger’s unilateral appointment of Retired Justice James Patterson as GECOM Chairman was constitutional.

Suriname’s former Minister of Justice and Police, Chandrikapersad Santokhi was the featured speaker at TIGI’s dinner. Santokhi is currently the leader of the Progressive Reform Party (VHP), which has eight seats in the National Assembly, and makes it the largest opposition party.