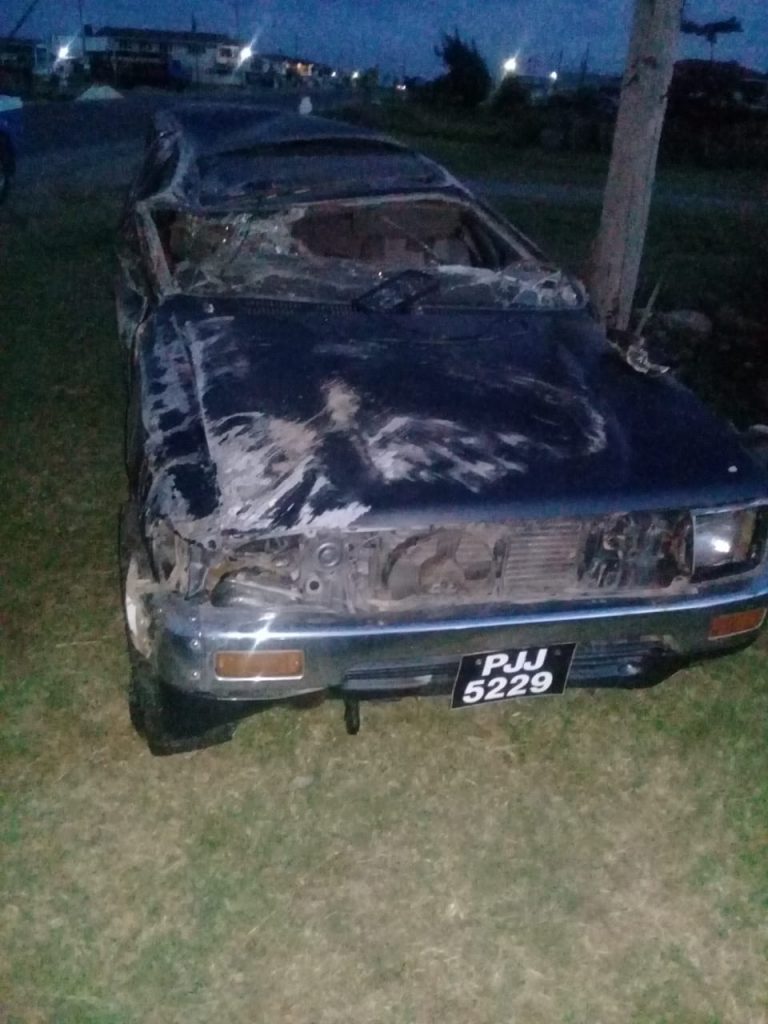 The car that 23-year old Yognarine Jaggit of 3D Bath Settlement, West Coast Berbice, was driving when he lost control and it toppled.

Three persons were killed in as many accidents on Guyana’s roads within 24 hours, police said Sunday.

The latest was Sunday at about 3:20 am on the Annandale Public Road, East Coast Demerara. The identity and address of the victim was not immediately known.

Police were told that the man was in the tray of a Canter lorry, GHH 3986, driven by a 50-year old man of Paradise, East Coast Demerara.

After the man in the tray knocked on top of the cab for the driver to stop, he attempted to jump off and fell under the left rear wheel of the same vehicle and  his head was crushed.

Investigators said the driver then stopped his vehicle and assisted in putting the injured man in the tray and took him to the Accident and Emergency unit of the Georgetown Public Hospital where he was pronounced dead on arrival. The driver is presently in custody and further investigation is being conducted.

Hours earlier at about 9 pm on Saturday at Experiment, Bath Public Road, West Coast Berbice, a car driver lost of control of the vehicle which toppled and landed on the north side of the road. “The driver was taken out of the vehicle in an unconscious state and taken to Fort Wellington Hospital where he was examined by a doctor and transferred to New Amsterdam Public Hospital where he died whilst receiving medical attention,” police said.

The driver has been identified as 23-year old Yognarine Jaggit of 3D Bath Settlement.

Police were told that Anthony, a porter disembarked the lorry, GSS 1407, driven by a 28-year old resident of Ogle Street, Triumph, East Coast Demerara, to pay a toll. After the payment, he reportedly jumped up onto the lorry’s gas tank to get back into the tray while the lorry was moving.

“The porter lost his grip causing him to fall between the lorry and trailer where he was ran over by the trailer. As a result of the collision the porter received injuries about his body. He was pronounced dead on the scene by a doctor attached to the Linden Hospital Complex,” police said.

The driver has been detained.