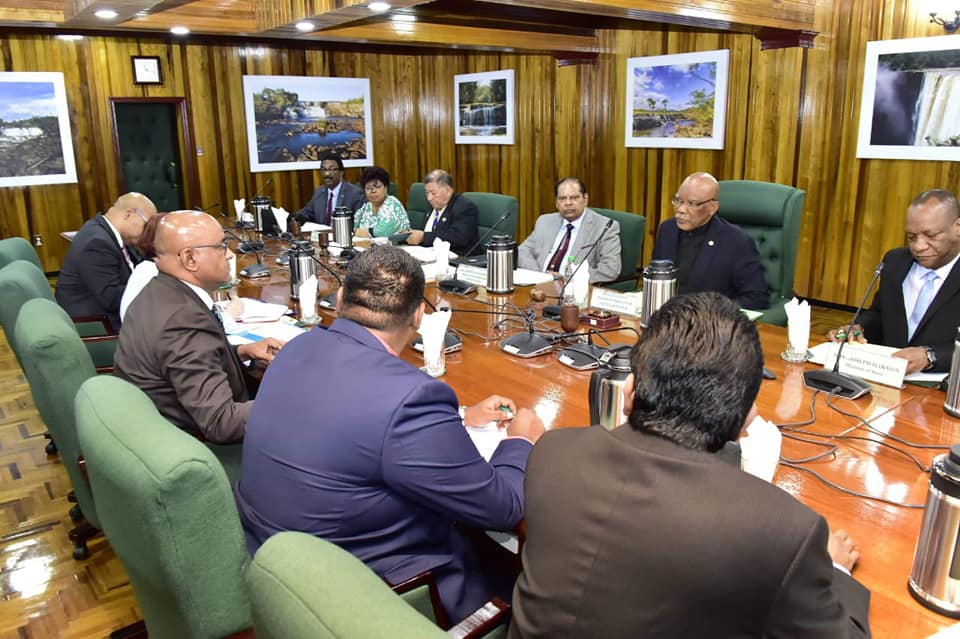 President David Granger and Opposition Leader Bharrat Jagdeo, accompanied by their delegations, at Monday’s talks to break the political impasse.

Opposition Leader Bharrat Jagdeo on Thursday announced that his People’s Progressive Party (PPP) would be writing the Caribbean Community (CARICOM) and the Organisation of American States (OAS) to inform them about the deteriorating political situation in Guyana.

“CARICOM will be faced with an illegal government, a member State that is illegal and I hope that they’ll treat it as an urgent matter,” Jagdeo said. Regional leaders are not scheduled to meet again until their full summit in July, but can call emergency face-to-face or teleconference meetings.

Restating that a constitutional crisis was looming over the impending oil-rich South American nation if no election date is called before March 21, the date when the National Assembly expires unless its life is extended with the PPP’s support, Jagdeo said he was not calling for CARICOM to mediate. “I’ve not asked for any role so far… It’s premature to talk about mediation but CARICOM must see it fit the same way when we had a crisis in 1997, a crisis that they (the opposition) caused by street protests, by a refusal to accept the results of elections although the margin was nearly 30,000 votes and they took the streets and they burnt buildings, etcetera, so that is the track record,” he said.

Jagdeo, a former Guyana President from 1999 to 2011, said he has already spoken with CARICOM Secretary General Irwin LaRocque about the “impending constitutional crisis and the illegality of the government”.

He said his party’s Chief Whip Gail Teixeira was asked to dispatch letters to the CARICOM Secretary General, a number of Caribbean leaders, the OAS, and the 53-member Commonwealth of Nations.

Already, the European Union (EU) and the United Nations Resident Coordinator in Guyana have expressed concern about the political climate here and have urged respect for the constitution.

The decision to write the regional and international organisations came one day after President David Granger refused to give into Jagdeo’s demands to name an election date before the existing voters’ list expires on April 30.

The Guyanese leader’s next move is to meet with the seven-member Guyana Elections Commission (GECOM) on Friday to ascertain how much time and money it requires to hold general and regional elections. Already, Granger has asked GECOM to prepare to conduct elections in 2019.

Elections should have been held the latest by August 2020, but the country has been pushed into early elections as a result of the National Assembly’s passage of a no-confidence motion last December.

However, the governing coalition and its elections commissioners have tenaciously maintained that there must be house-to-house registration to remove the names of deceased persons and emigrants as well as ensure that persons are properly registered in the districts that they reside.

The PPP is equally insisting that elections should have been held before the expiration of the 90-day deadline on March 21 following the December 21 no-confidence motion’s passage. But, with that date already slipping Jagdeo has shifted to April 30 by when he wants elections to be held.

To ensure credible elections with the current voters list, Jagdeo has proposed to Granger that government pay for three polling day scrutineers from both major contesting political parties to be present at the more than 2,000 polling booths across this 83,000-square-mile-country.

Ruling coalition-appointed elections commissioner, Charles Corbin has already said that even if there is an acceptable voters’ list, GECOM would need at least 126 days for other preparations such as nomination day, training of polling day staff and procurement of sensitive materials such as ballots, stamps and indelible ink from overseas.