BREAKING: Jagdeo will only meet Granger if elections are set before April 30 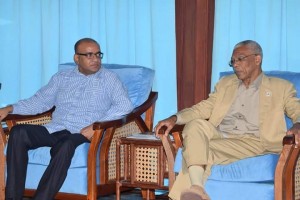 Opposition Leader, Bharrat Jagdeo on Monday virtually demanded that general elections be held with the existing voters’ list which expires on April 30.

He made his position known to Minister of State, Joseph Harmon, two days before he is expected to meet President David Granger to discuss how to deal with the expiration of the 90-day period after the passage of the no-confidence motion on December 21, 2018.

Jagdeo told Harmon that he would only meet Granger and agree to the extension of the life of the government if it is to set an election date before the expiration of the list.

“On the agreement of your Government to these proposals, the Parliamentary Opposition will be prepared to lend its support for the two-thirds majority required to comply with Article 106 (7) for an extension beyond March 21, 2019.
l, therefore, am proposing that the meeting focus exclusively on the date for these elections,” Jagdeo told Harmon.

Jagdeo’s opposition People’s Progressive Party (PPP) and its three elections commissioners have already taken issue with the Guyana Elections Commission (GECOM) hiring staff to conduct house-to-house registration. Granger’s governing coalition and its three elections commissioners have been demanding house-to-house registration to remove the names of dead persons, emigrants and Guyanese who have changed their residences.

Following is the full text of the Opposition Leader’s letter to the Minister of State.

Leader of the Opposition Letter to Harmon

I received your letter dated February 25, 2019 conveying the President’s invitation to meet me on Wednesday March 6th, 2019, at 11:00 am, at the Ministry of the Presidency.

As I have publicly stated, and, herein reiterate, that the Guyana Constitution is the supreme law of Guyana, and, therefore, the proposed meeting can only and must only focus on ensuring that the Constitution is not violated, and, that general and regional elections are held in compliance with Article 106(6) and 106(7) following the December 21, 2019 passage of the No-confidence motion.

In this regard, I am proposing to the President for his consideration, the following:-

i) The date of the general and regional elections to be held before the expiration of the present voters’ list on April 30, 2019;

ii) No new contracts to be awarded by the State, including Regional Democratic Councils, and, State-owned corporations after March 21, 2019;

iii) No new agreements, loans, grants, land leases, or any other such agreements or contracts after March 21, 2019, that bind Government; No abuse of State resources for partisan activities/purposes;

v) Access to the State-owned media by all the contesting political parties.

On the agreement of your Government to these proposals, the Parliamentary Opposition will be prepared to lend its support for the two-thirds majority required to comply with Article 106 (7) for an extension beyond March 21, 2019.

l, therefore, am proposing that the meeting focus exclusively on the date for these elections.

Further, I believe that my proposal to hold general and regional elections before April 30, 2019 is reasonable and feasible with a claims and objections period, provided that GECOM acts in good faith and in conformity with its mandate and the Constitution. This proposal will ensure that the Constitution remains intact and prevents our nation slipping into a constitutional crisis.

However, time is of the essence, March 21, 2019, when the government becomes unconstitutional, is fast approaching.

Leader of the Opposition