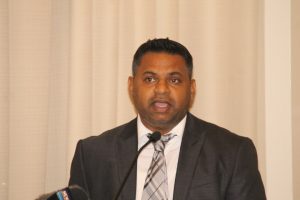 The Georgetown Chamber of Commerce and Industry (GCCI) on Monday reported that its members have so far experienced a significant decline in business activity due to political uncertainty associated with the no-confidence motion.

However, Indar did not state how many actually responded. “Repondents? A sizeable and material representative of the chamber’s membership,” when asked.

The GCCI said in a statement that 64% of respondents or about 2 in every 3 businesses “experienced some form of decline due to uncertainty over the state of political affairs in Guyana.”

Indar explained that the survey focussed on the period from December 21, 2018 when the no-confidence motion was passed to present. “We asked, what was the performance during this period?,” he said.

The GCCI said it was concerned about the effect of the impact of the associated uncertainty on the business community. “This significant decline in commercial activity is worrying and with the continued state of political uncertainty can result in further decline in economic activity.

The Chamber said the climate of uncertainty was unhelpful to local and foreign investors’ confidence in business planning, budgeting and other key features of business management and administration.

The Chamber expressed the hope that the political environment would improve.

Government and opposition elections commissioners Sase Gunraj and Vincent Alexander, respectively, confirmed that recently members of the diplomatic core told a meeting with the Guyana Elections Commission (GECOM) that the political uncertainty was negatively impacting on inward investment.

The GCCI’s membership has more than 240 business organizations which include micro to enterprise types, located throughout the country and in the CARICOM region.

The Chamber appealed to President David Granger and Opposition Leader Bharrat Jagdeo to swiftly “resolve political issues that exist in order to restore and boost investors’ confidence, which would result in Guyana’s economy growing comfort(ably).”

Jagdeo’s People’s Progressive Party (PPP) has repeatedly assailed the GECOM and the governing coalition for conspiring to ensure general elections are not held within the 90-day timeframe of the no-confidence motion that expires on March 21.

Jagdeo had repeatedly warned of a looming constitutional crisis and he has so far signaled that he would not be relenting on his refusal to allow an extension of the deadline by giving his party’s support.

GECOM has also been told by the Finance Ministry that it could not spend the GYD$3 billion allocated for house-to-house registration on general elections and must go back to the Parliament for more cash.

The Court of Appeal is set to hear applications by the State for a stay of the High Court’s decision and a conservatory order for the President and Cabinet to remain in office pending the hearing of the appeals all the way up to the Caribbean Court of Justice.