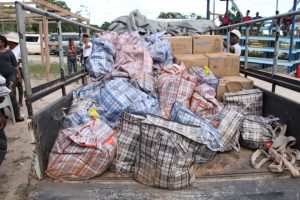 The relief hampers that were transported to RUSAL’s Aroaima location.

General Secretary of the Guyana Bauxite and General Workers Union (GB&GWU), Lincoln Lewis advised the workers at the Aroaima bauxite operations to let the leadership of the local union branch take control of the hampers.

“Don’t let that food undermine you,” he said as Ministry of Social Protection officials offloaded the bags of supplies at the Sports Club.

Lewis recommended that the bags and boxes of  “food remain” under a shed and the Ministers, who were expected to meet with workers, hand them over to the union branch. You can say ‘thank you’ and let the management of the branch handle it,” he said.

“They will come here and give the 61 people and that will be the beginning of the division. We can’t have that,” said Lewis, a veteran trade unionist and General Secretary of the umbrella Guyana Trades Union Congress.

President of the GB&GWU’s local branch, Ephraim Velloza thanked those who took the risk and “came so far to bring the relief”.

He said the hampers would be stored in the club, and at the same time he questioned what would happen to the other workers who are also off the job.

Lewis added that when the Government ministers and officials get the Russians to agree to the workers’ demands “life will be better”.

The workers are demanding that RUSAL agree to terms of resumption that would include no break in service, no loss in pay and recognition of the GB&GWU as the bargaining agent.

RUSAL-BCGI on Monday fired 61 workers after they downed tools to protest a one-percent pay increase for this year and other grievances.