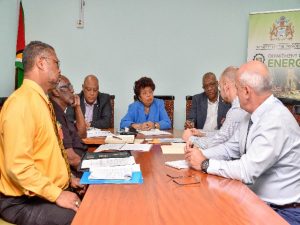 Minister of State, Joseph Harmon Thursday morning made it clear that Guyanese workers must be treated in a respectful manner and at all times the country’s labour laws must be upheld at a meeting with the executive members of the Russian Aluminium (RUSAL) company.

The meeting aimed to identify ways in which the ongoing strike by workers and their subsequent dismissal can be resolved amicably. Minister Harmon was accompanied by Minister of Social Protection, Amna Ally, Minister of Natural Resources, Raphael Trotman and Minister within the Ministry of Social Protection with responsibility for Labour, Keith Scott.

RUSAL was represented by Vladimir Permyakov, Company Representative in Guyana and Sergey Kostyuk, Director of Alumina and Bauxite Department at RUSAL, who both flew in from Russia for the meeting.

During the meeting, Minister Harmon said government views the ongoing dispute as serious and noted that it was among priority matters on the agenda at the Ministerial Plenary.

“There are two objectives to this: the Guyanese workers must be treated in a respectful and fair manner at all times… their rights must be respected and at the same time, the company must function and ensure it makes profits for its shareholders. It is a question of finding common ground and ensure that our workers’ rights are respected. We must find common ground to move forward. The issues must be dealt with in a clear way,” Harmon was quoted as saying in a statement issued by the Ministry of the Presidency following the meeting.

At the conclusion of the meeting, Minister Ally said the Government has laid out its contentions while the company was also given the opportunity to do so. The dismissed workers will also be given a chance to have their side heard, she said.

“What is going to happen, tomorrow (Friday) we are going to have a second round of engagement where Minister Keith Scott, the Minister within the Ministry of Social Protection and the person who deals specifically with Labour, will be meeting with the workers at Aroaima tomorrow to have some discussions with them. What came out of this morning’s meeting is that after we have laid some of the issues, the executive will be taking this matter to their principals, have a discussion and then get back to us.

Meanwhile we are continuing our engagements on the ground with the workers. It is Government’s intention to have this matter resolved amicably,” Ally said.

In addition to the engagement with the workers, Minister Ally said the Ministry of Social Protection will be providing support to the dismissed workers, particularly in the provision of basic amenities.

“One of the things we are going to be doing tomorrow is that we will be taking up some supplies that will assist the 60-odd workers who have been taken off their work posts, food items, et cetera, to sustain them. The workers are there. They are in need. Their basic needs have been taken away and [as] the Ministry of Social Protection… we are a caring Government and a caring Ministry. We have to find a way to give support and we cannot just leave them there. We have to be able to give them some sort of support for their livelihood so it shouldn’t be interpreted adversely,” she said.

At the close of the meeting, the RUSAL’s representatives committed to briefing its principals and making a decision.

Tagged with: mine workers Minister of State Russian Aluminium strike