No cabinet meetings because there is no stay of High Court’s decisions on no-confidence motion; Court of Appeal begins preparations for hearing 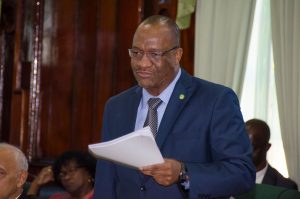 Member of Parliament and Minister of State, Joseph Harmon

Minister of State, Joseph Harmon on Friday said Cabinet has not been meeting since the High Court’s decision that the no-confidence motion was validly passed almost two months ago, but plenaries of all junior and senior ministers were being held.

“There is a judgement of the Court that was made with respect to the Cabinet and that judgement is appealed but we have not obtained a stay of the judgement as yet and, therefore, we have not held Cabinet meetings as such,” he told a press conference.

The Ministry of the Presidency on Friday for the first time did not call the meeting with the press event a “post-cabinet meeting” but rather a press conference.

He said plenaries -“an extended Cabinet” – are held under the Chairmanship of the President of Guyana once monthly but the weekly Cabinet meetings were not held since Chief Justice Roxane George-Wiltshire’s ruling.

The Chief Justice’s decision on January 31 states that the President and the Cabinet stood resigned immediately after the no-confidence motion (NCM) was passed on December 21, 2018 by 33 to 32 votes and elections should be held in 90 days which expires on March 21, 2019. “I hold that the NCM was carried as the requisite majority was obtained by a vote of 33:32. The President and the Ministers cannot therefore remain in Government beyond the three months within which elections are required to be held in accordance with art 106(7), unless that time is enlarged by the National Assembly in accordance with the requirements of the said art 106(7),” the Chief Justice had stated. 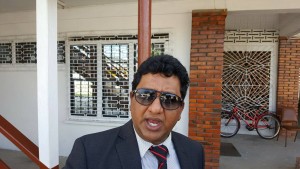 Asked what was preventing the President from calling the elections since the ministers were not meeting as a Cabinet, Harmon said the constitution provides for the elections to be held within three months of the National Assembly’s approval of the no-confidence motion or an extension to be approved by two-thirds of the House.

Former Attorney-General, Anil Nandlall, who was among several lawyers who met with the Registrar of the Court of Appeal to settle records to be circulated to the lawyers for all the parties and the appellate judges, is already objecting to the Court of Appeal’s upcoming Wednesday hearing of the requests by the State for a stay of the decision and a conservatory order to ensure the President and the Cabinet remain in office. Nandlall prefers the interlocutory appeals be heard rather than spending more time merely hearing arguments for the stay and the order.

“We are hoping at the hearing for that matter that we will be able to persuade the Court that it is more convenient to hear the appeal. Why would you want to dilate and delay those interlocutory matters when in fact we can hear and determine the appeals in their entirety and bring a quick resolution to the matter at least in this court so that anyone that is aggrieved they are free to go to the Caribbean Court of Justice?,” he asked. Nandlall reiterated that he did not expect the Court of Appeal to grant the stay or the order to block the constitution from operating.

Nandlall said he has also formally asked the Court of Appeal to hear the case urgently after a date is fixed for hearing within 14 days after which a decision could be possibly handed down two days later.

Representing Harmon, in his capacity as Chairman of A Partnership National Unity (APNU), Attorney-at-Law Roysdale Forde said the parties have seven days to submit all the relevant records for the appeals after which the Court of Appeal will set a date for hearing. “I don’t believe it’s taking too long, having regard to the timelines and the regular practice. It’s being expedited by the Court of Appeal,” Forde added.

Tagged with: Cabinet meetings Court of Appeal Guyana Ministry of the Presidency No Confidence Motion