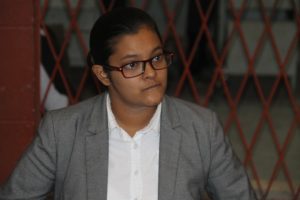 Dianne Jafeerally at the Georgetown Magistrates’ Court on Monday.

The University of Guyana (UG) student, who allegedly issued bomb threats against that tertiary institution, was Monday refused bail on a charge under the Telecommunications Act.

Sheliza “Dianne” Jafeerally, 25, of Cummings Lodge, Georgetown, and a Sales Consultant at Yello Media Group, pleaded not guilty to the offence that on Tuesday, February 5, 2019 by means of a public telecommunications system she caused anxiety to the students and staff at the University of Guyana by transmitting a false message knowing same to be false.

Chief Magistrate Ann McLennan upheld the prosecutor’s objection to bail on grounds of tampering with the evidence and witnesses as well as other investigations against the young woman. The prosecutor also wants one week for four statements to be obtained.

Jafeerally was refused bail on the grounds of public interest and causing public terror. She was remanded to prison until February 18 when she would appear in the Sparendaam Magistrates’ Court.

Defence Lawyer Latchmie Rahamat lamented that her client was last Friday arrested and presented with a computer-generated printout of a telephone number similar to hers. Rahamat said the printout had no official stamp, title or heading that indicated it was obtained from a telecoms company. “My client had completely denied the allegation put to her by the police,” Rahamat said, adding that “she intends to vigorously defend herself”.

Rahamat noted that although Jafeerally had been in police custody for more than 72 hours, she had not been told of any other offence or allegation. The lawyer rejected the prosecutor’s grounds for objecting to bail and she called for disclosure on what the pending investigation was about. “If there was another allegation, they were duty-bound to put same to her,” the lawyer said.

Rahamat complained to the court that police swooped down on Jafeerally’s home and seized all her electronic devices as well as questioned a number of her friends, a number of whom sought legal advice.

UG classes were called off last week after the institution received threats of bombs being planted there.

Police said Jafeerally was picked up last week Friday based on telephone records and the persons with whom she was associated.