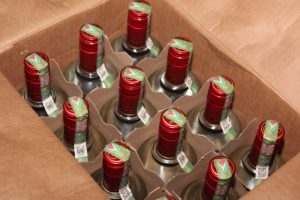 Liquor that was stamped by the Guyana Revenue Authority as proof that it was legally imported. (file photo)

The Guyana Revenue Authority’s (GRA) enforcement agents on Wednesday intercepted a shipping container of liquor said to be valued at more than GYD$15 million which a local shipping agent declared as other items, GRA Commissioner-General Godfrey Statia said.

Unofficial estimates, according to other sources, put the value of the undeclared liquor at as much as GYD$40 million.

Investigators are working on the theory that there might have been collusion between a GRA staffer and the shipper, who owns a shipping agency, and was detained for questioning.

The bust was made at the Guyana National Industrial Corporation (GNIC) wharf, Lombard Street, Georgetown.

Back in 2017, the GRA introduced an alcohol stamping system as part of a crackdown on the smuggling of liquor that provides unfair competition to local producers, Demerara Distillers Limited and Bank DIH Limited.