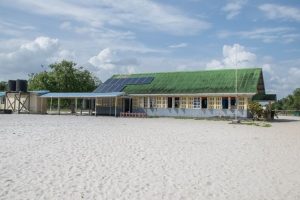 A new school building with more modern facilities will be constructed in the Sand Hills community in Region Three (Essequibo Islands-West Demerara).

According to the Head of First Bauxite Corporation-Guyana Office, Ian Christie, the initiative is part of the company’s capital project for the community.

“During this year as part of our capital project we will be doing three things here for the school and the local community; the first thing would be a new school building which cost over four hundred thousand U.S dollars,” Christie was quoted as saying by the government’s Department of Public Information.

In addition, Christie said scholarships will be offered to students making the transition from primary to secondary school and then university.

“Hopefully, students will go to the University of Guyana. We would love that for Sand Hills.” 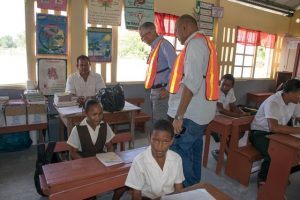 Minister of Natural Resources, Raphael Trotman, and Minister of Business, Dominic Gaskin interacting with a teacher and students of the Sand Hills Primary school

Christie also said that the company remains committed to the development of Sand Hills as a personal responsibility, as it develops its own mining project in the area. To this end, First Bauxite Corporation will provide potable water and electricity for the community.

“We are supporting them in many ways, we installed a brand-new solar energy system about 12 months ago and so for the first time ever this school had electricity to run their computer and other facilities,” said Christie.

First Bauxite Corporation is Guyana’s third bauxite mining company. It operates out of Bonasika. The mining project includes the development of the mine site, processing plant and supplementary facilities. The company, to date, has employed twenty-five persons from the Sand Hills community. There is a total of 130 local contractors on site with 70 permanent staff 10 of whom are in middle management positions and 5 in senior management. There are also 8 expatriate managers on site.