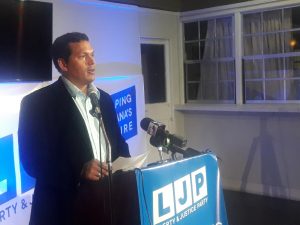 Leader of the Liberty and Justice Party (LJP), Lenox Shuman touted transparency and accountability at his political party’s launch but declined to immediately disclose his financial backers until campaign finance legislation is passed.

“I cannot disclose that,” he said, and at the same time denied it was not any of the existing political parties.

He said the financiers did not want to be named for fear of being targeted by their opponents. “I am saying that because our funders are not willing to be identified in that sense. Why? Because we know that some of them have literally been victimised by the public and all you have to do is look back at the papers and see what happen,” he added

Noting that the LJP had refused a GYD$100 million offer, he said it was not easy turning down that massive injection of funds but his party was wary of being used as a funnel for dirty money. “We don’t know where the money is coming from. We don’t know if the businesses are legitimate or if they are simply trying to launder money through us so we don’t want to commit to that,” he said.

Shuman told reporters after the formal launch of the party at the Georgetown Club, Camp Street, Georgetown, that he would have no qualms disclosing the names of the financiers when campaign financing legislation is enacted. At the same time, he was not in favour of disclosing how much money would be remaining. “By the time we get to elections time, what we intend on doing is making public and we have to obviously talk to people. This is not something we can snap on and jump on right away but we are going to talk to those people so that we can present that to the public and ensure that on our website there is a constant monitoring of our finances. I can’t say I will show you the balance but we could at least show you how the money is spent and who our donors are,” said Shuman.

In his address, the LJP Leader promised that his party would be “transparent, accountable, responsible, open-minded, responsive and pragmatic”.

Though he did not reiterate in his address that the LJP would not coalesce with either of the People’s National Congress Reform or the People’s Progressive Party, he again ruled out doing so in an interview with the media.

Shuman, a former Toshao of Pakuri, St. Cuthbert’s Mission and former Vice Chairman of the National Toshaos Council stressed in his address that the LJP would not discriminate against anyone because of their race, sexual orientation, religion or physical infirmity.

While Shuman is an Amerindian and the majority of the attendees at the party’s launch were Amerindian or of mixed Amerindian heritage, the political leader emphasised that his party is for all Guyanese. “The Liberty and Justice Party is committed to shaping Guyana’s future with like-minded Guyanese of all ethnicities, all identities, all cultures of all ages who respect each other’s right to share equally in power, the economy and the patrimony of Guyana,” he said.

Shuman also assured that the LJP was committed to rooting out institutionalised corruption, freedom of expression  “without fear of reprisals”; improving health, education, environmental protection, public security and forging ahead with constitutional reform. “The LJP is of the firm belief that the future of our nation can only be secured by providing a society that fosters democracy, a modern and strong constitution, articles of law, economic stability, equality, equal opportunity and justice for all. In such an environment, we can nurture and support our citizens to realise their and our true potential,” he said.

At a time when Venezuela has been sabre-rattling over its claim to the Essequibo Region and maritime waters, the LJP leader said “we aim to defend Guyana’s borders with exhaustive diplomatic means and a strong Defence Force to protect our sovereign territory”.

Dating back to 1966 when Guyana gained independence from Britain, Shuman noted that successive governments have failed to provide political  stability, economic growth and investment in its people.

Among the attendees at the launch were political commentator, Attorney-at-Law and Chartered Accountant Christopher Ram; Attorney-at-Law Nigel Hughes; former executive member of A New and United Guyana, Terrence Campbell and former Commander of the Guyana Defence Force’s Coast Guard, Flores.