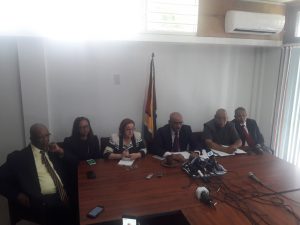 Top representatives of the opposition People’s Progressive Party (PPP) and the government are to meet with the Guyana Elections Commission (GECOM) to determine its readiness for general elections, Opposition Leader Bharrat Jagdeo said Wednesday.

About two and a half hours after meeting with President David Granger, Jagdeo said Opposition Chief Whip Gail Teixeira and government Chief Whip Amna Ally are due to meet possibly on Thursday before meeting with GECOM to “determine its readiness”. Ally, who is also General Secretary of the People’s National Congress Reform, and Teixeira were also part of the Jagdeo-Granger meeting.

“Elections have to be held this year. The constitution says that,” said Jagdeo, ahead of a joint communiqué.

Granger earlier Wednesday said elections would be held when GECOM is prepared.

Jagdeo declined to infer whether government has conceded that Guyanese would have to go back to the polls this year following last November’s local government elections . “I don’t want to be accused of breaching the spirit of the talks” he said while noting that it was President Granger who placed the operational readiness of GECOM on the agenda.

Jagdeo said among the issues that the PPP would be interested in is the time frame for nomination day which could be in February if elections are to be held by March 21, the end of the 90-day period following the National Assembly’s passage of the no-confidence motion on December 21. He cited other issues as the printing of ballots and the generating of a voters’ list. The Opposition Leader noted that the current list of registrants is valid until April 30, 2019.

GECOM Chairman James Patterson remains on medical leave, and Jagdeo said the possibility of appointing a temporary chair was not discussed.

Insisting that the National Assembly should reconvene only for elections-related matters, Jagdeo said it was possible the lawmaking body could reconvene to provide funds to GECOM or extend the life of the House by a couple of weeks. He noted that GYD$3 billion has been set aside for house-to-house registration this year but which could now be used for something else.

Jagdeo said the President committed to asking his party faithful to “tone down” their rhetoric and he committed to doing likewise. “Toning down means toning down on both sides” Jagdeo said.

Meanwhile, Jagdeo said his 35-member PPP Central Committee would Thursday hear presentations from the five presidential candidate hopefuls and if there is no consensus it would be taken to a secret ballot. The quintet is made up of Anil Nandlall, Frank Anthony, Irfan Ali, Vindhya Persaud and Gail Texeira.