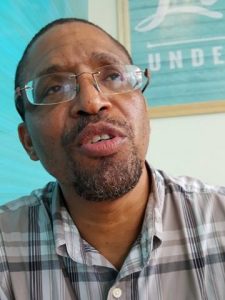 Co-founder of A New and United Guyana (ANUAG), Terrence Campbell on Monday announced that he has resigned from the newly-formed political party because the country’s political environment has been poisoned by the no-confidence motion.

“It is like a poisoned well and since last week I had great angst,” the CAMEX Ltd Managing Director told Demerara Waves Online News. Campbell said persons who are close to him could not see the wisdom of a third political party playing a role to secure constitutional reform but more concerned about taking away votes from the coalition. “It’s like daggers are drawn. Daily you are talking to people and the illogical arguments and people can’t see their unconscious bias. I looked at it and I said this certainly doesn’t look like the time to sow and in any event the field on which to sow looks as if it’s poisoned,” he said.

Asked if he did not see a role for himself in diffusing increasing “polarising rhetoric and actions”, Campbell said it would be quite difficult to do so.

He denied that his decision was motivated by fears of a boycott of the US-franchised fast-food business Pollo Tropical (Guyana) after a pro-government Internet-blog post, OneVoiceCanWin, earlier Monday had criticised him and another prominent city businessman, Gerry Gouveia. The post has since been taken down. “I believe my business is owned by God and he can bring it down himself and no man can bring it down. That’s my philosophical belief. I don’t believe that any call for boycott will bring it down… I have zero fear about a call for boycott,” he said.

Reform, Inform, Sustain, Educate (RISE) Guyana, he believed, might have angered certain persons in the governing coalition resulting in the OneVoiceCanWin post because they had been unaware that he had severed ties with the more-than-one-year-old civil society organisation whose major plank is said to be advocating for constitutional reform.

Campbell also shrugged off questions that his resignation was as a result of a difference of opinions between himself and other party steering committee members, Senior Counsel Ralph Ramkarran and Dr. Henry Jeffrey. “I think that was a point of division between myself and the other members of the steering committee but that would not be fatal to the purpose of ANUG which is constitutional reform,” he said.

Meanwhile , Jeffrey told Demerara Waves Online News that Campbell’s exit was a blow, but that general pressure comes with the political landscape. “Those things happen in this kind of environment. People out pressure on people to do or not to do things. These things must be expected. You don’t go into politics and don’t expect these things,” he said. Jeffrey said Ramkarran had communicated with Campbell in an effort to convince him to remain in the party.

At the same time, the businessman urged caution by those calling for A Partnership for National Unity+Alliance For Change administration to resign on the passage of the no-confidence motion without due regard to the fact that the failure by a number of parliamentarians to declare one’s foreign citizenship is unconstitutional and punishable. “When you bring an unconscious bias and you speak to the issue, you have to remember one side feels that there has been a coup and the other side feels that the government remaining there is unconstitutional,” he said.

The businessman said the aim of ANUG was to hold the balance of power in the 65-seat National Assembly, secure constitutional reform and dissolve itself.

He questioned the logic and implications of calling on the government to resign if the Court finds that the former government parliamentarian, Charrandas Persaud, had been ineligible to sit and vote in the House because he is a Canadian. “So what if the judge rules that he was disqualified from voting and if the government has indeed resigned, then what happens: Would the judge’s ruling now un-resign the Cabinet, reinstate the Cabinet? We don’t know. This is uncharted territory,” he said.

While the principle and practice of a no-confidence vote has been inherited from the United Kingdom, Campbell said the British Parliament never had a situation where about 40 percent of the House of Commons was ineligible to vote.