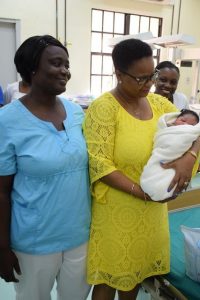 A baby boy was warmly welcomed at the Georgetown Public Hospital at 1:05 am on New Year’s Day, this being the first delivery at the institution for 2019, the government’s Department of Public Information (DPI) reported.

A girl and two other boys were subsequently delivered during the morning hours.

The lucky mother, Serena Gordon, who resides in Albouystown, went to the hospital’s maternity unit fully dilated and ready to deliver. Her son was delivered through natural childbirth.

Hampers were handed over to the mother of the baby compliments of the Ministry of Public Health, Georgetown Public Hospital Corporation, and Republic Bank Limited. Also, Republic Bank has ensured that the mother of the first baby born on New Year’s Day will receive a certificate for a Right Start account for the child, the DPI reported.

An excited Nurse Birthley Vyphuis was on duty during the 8:30 pm to 7:30 am shift and anticipated the birth of GPHC’s first set of babies for 2019. She said in her almost 30 years in the nursing profession she has never had the opportunity to deliver a baby on a holiday.

Vyphuis said that she was determined to get the opportunity to deliver at least one of the New Year’s Day babies, and as luck would have it, she delivered the very first. 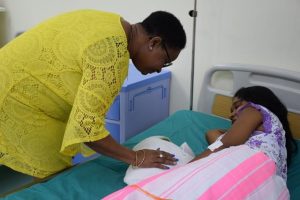 “This is a record for me and I am excited… when I told the mother that she was first for 2019 she was surprised and happy. Being a first-time mother, she didn’t give me any trouble. I followed all the necessary steps, made sure baby and mother was skin to skin, so yes, this is definitely my inspiration for the new year,” she said.

Nurse Vyphius was recently awarded by the GPHC administration for longstanding service to the hospital. Minister of Public Health, Volda Lawrence, who visited the holiday newborns, also reached out to the nurse and thanked her for facilitating a successful delivery.