Georgetown’s new Mayor is Pandit Ubraj Narine and his deputy is Alfred Mentore. 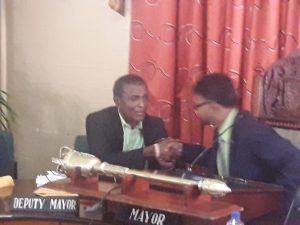 Before they were elected the People’s Progressive Party and the Alliance For Change councillors of Georgetown united in their failed bid for secret balloting to elect the Mayor and Deputy Mayor of the city.

Eight councillors voted for the motion and 21 by APNU against.

Ivelaw Henry of A Partnership For National Unity nominated Pandit Ubraj Narine to be elected as Mayor and seconded by former Mayor Patricia Chase-Green.

Narine won by 21 votes from APNU, six PPP against and two AFC abstentions

The People’s Progressive Party’s Bhishram Kuppen was nominated by his colleague Deon Younge.

Councilor Roach of the Alliance For Change nominated Michael Leonard of her party but it was not valid because no one seconded it.

Councillor Leonard nominated Councillor Roach, both from the Alliance For Change.

Six voted against 23 in favour of Mentore.

The Chairman of the Finance Committee is Clarke and its Vice Chair is Chase-Green.