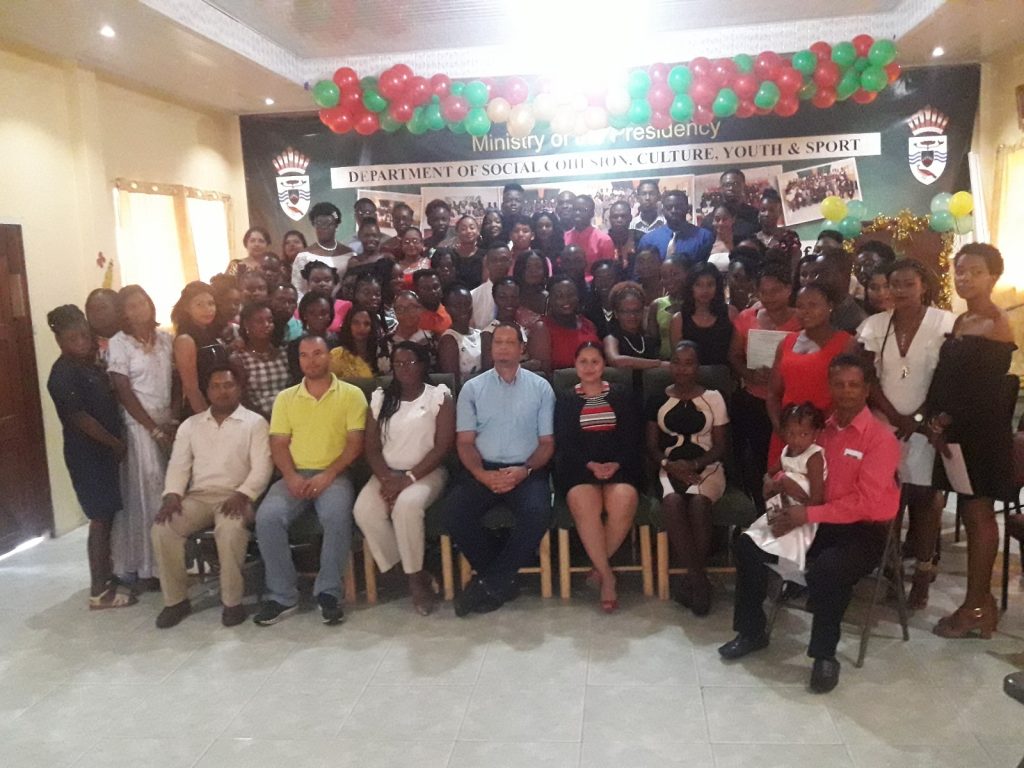 The graduates of the Youth Leadership Training Programmme (Module 2), The course was organised by the Ministry of the Presidency’s Department of Social Cohesion, Culture Youth and Sport.

Sixty youths on Sunday graduated from a Ministry of the Presidency-sponsored Leadership Course  that included subjects such as democracy, mobilisation and the Green State Development Strategy (GSDS), government’s flagship development plan.

“We consider that it would be remiss of any youth to claim to be leaders within Guyana and you are not aware of the flagship policy of the State,” he said.

Austin said the Youth Leadership Training Programme was conceptualised after outreaches in 2015 and 2016 across the 10 administrative regions that gleaned information about youth memberships, requirements of leaders, meeting and meeting procedures, and the roles of office holders. He said the training programme is participatory, not competency-based and there are only qualitative instead of quantitative assessments.

“It is an intense interaction and practical experience, which once properly grasped can be of much benefit to the participant,” he said.  So far, more than 600 persons have been trained in module one. Activities of module two include practical experience, committee participation, mock youth parliament, flag-raising ceremony and a talent show.

Addressing the graduation ceremony at the upgraded Madewini Training Centre, Chief Executive Officer of the Guyana Office for Investment (GO-Invest), Owen Verwey advised the youths to be aware of Guyana’s cultural, political and social environments. “Awareness of political and cultural environment: In Guyana, we are lucky we have many cultures so we get an early exposure to that and we also have a politically charged environment so we get exposed to that but in today’s world, it’s a bit more important that we understand the gender issues, the age issues and the disability or special needs aspects…The world is changing and those softer skills are what will make a difference in the world today,” he said.

Verwey, a Development Finance expert who has worked in Canada, also suggested to the graduates to use their mistakes during innovation and creativity as a learning experience, build capacity trust in others instead attempting to do everything themselves, and be aware of interpersonal skills ranging from a handshake to eye contact.

She assured the graduates that they have a place in Guyana’s development, after they acquire not only professional and academic qualifications but importantly experience in communities in dealing with challenges such as being excluded by those who are associated with other interest groups. “This nation, Guyana, needs young people and we don’t just do leadership training to have another training on our board or on our charts. It is done so that you are prepared for today, tomorrow and the future. Carmichael-Haynes said the training programmes are being conducted to prepare youths for future leadership roles. “It is done so that when your current leaders call upon you, you are equipped and ready to go out,” she added.

The GO-Invest Chief Executive Officer further recommended that the graduates grasp opportunities to chalk up experience. “As much as we are young and we would like to lead, there is something called experience that we need to respect. It comes with year, it comes with different situations and it also comes from simply sitting and observing what other people do. As simple as that, as we overlook it, it’s called experience,” Verwey said.