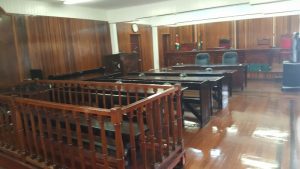 Inside the Court of Appeal’s courtroom

The Guyana Court of Appeal on Friday pushed back delivering its decision on the constitutionality of  President David Granger’s unilateral appointment of the Chairman of the Guyana Elections Commission (GECOM).

The Justices of Appeal are Chancellor of the Judiciary, Yonette Cummings-Edwards, Rishi Persaud and Dawn Gregory.

After a more than 10-minute in-chambers discussion with Attorney General, Basil Williams,  Solicitor General, Kim Kyte and Attorney-at-Law, Anil Nandlall ,  who is representing the People’s Progressive Party’s Executive Secretary, Zulfikar Mustapha, the judges emerged and had a brief discourse on the status of the case in open court.

Williams said the judges felt they were four areas not dealt with adequately so they want them discussed and they would send the questions later Friday. Nandlall said it was about “some areas that we did not address but they would like to hear us on including Chief Justice, Roxane George-Wiltshire’s ruling in a related case by citizen, Marcel Gaskin and the Chief Justice’s decision that is now the subject of an appeal.

“They said that since they were aware that either side would go to the CCJ (Caribbean Court of Justice) if they feel aggrieved by the decision, they want their ruling to cover what they consider to be all the relevant aspects,” Nandlall added.

The answers are expected to be provided by the lawyers next week Tuesday.

Among those, who were in the courtroom to listen to the expected judgement, were former President Donald Ramotar and Neend ‘Neil’ Kumar who are also long-serving executive members of the opposition People’s Progressive Party (PPP).

President Granger in October 2017 had unilaterally chosen Retired Justice James Patterson for the post of GECOM Chairman, after rejecting a total of 18 names contained in three lists that Opposition Leader, Bharrat Jagdeo had submitted to him over the past 10 months.
PPP Executive Secretary, Zulficar Mustapha had immediately filed a High Court action asking that the be quashed because Patterson was allegedly biased and the Guyanese leader violated the Constitution by picking him.

But in June Chief Justice Roxane George-Wiltshire had ruled in June that the President can rightfully ignore the Opposition Leader’s nominees for the post. 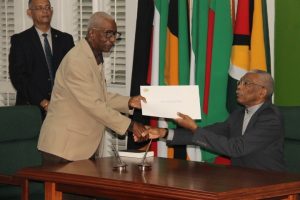 FLASH BACK: Retired Justice James Patterson receiving his instrument of appointment as the new Chairman of the Guyana Elections Commission from President David Granger.

Mustapha appealed the decision to the Guyana Court of Appeal to scrap the entire decision and instruct President David Granger to pick one of Opposition Leader Bharrat Jagdeo’s 18 nominees contained in three separate lists.

Led by Attorney-at-Law, Anil Nandlall, the legal team contended, among other things, that George-Wiltshire erred and misdirected herself by failing to call into the question Granger’s decision to appoint Retired Justice James Patterson as GECOM Chairman although she said the Guyanese leader should have given reasons.