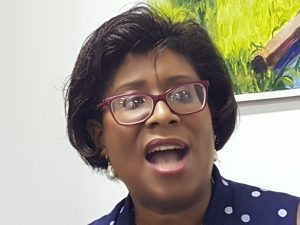 Minister of Public Telecommunications, Cathy Hughes wants more public conversations about how the potential benefits of the expected massive oil earnings can be used to benefit ordinary Guyanese and says she has already raised the matter at Cabinet.

In reiterating her support for poor Guyanese to receive conditional direct cash transfers from the oil revenues that are expected to begin flowing in 2020, Hughes said that was the type of conversation that the nation needed to get involved in.

“We are working on a mechanism because this is something I personally raised in Cabinet on Tuesday that we have to facilitate some intelligent discussions on these issues… and I gave my commitment that we are going to start looking at how we need to do it. That is something that is severely lacking that we have not paid sufficient attention to,” Hughes, a former journalist and advertising executive, said in response to a question from Demerara Waves Online News.

The Public Telecommunications said “I definitely would” support direct cash transfers to poor Guyanese as was recently suggested by Distinguished Economics Professor, Clive Thomas. The time has come, she said, to brainstorm how the model could work including the beneficiaries and the mechanisms that are required.

“There are Guyanese out there that got great ideas. How do we begin to hear from them other than the five voices in the public space…They have become experts. We never had an oil industry. How would we expect that in 2015 or by 2016 we will get a cadre of local experts in this industry,” she said, noting that Trinidad and Tobago took 100 years to develop its oil industry and still made mistakes.

The Guyana government has come in for a torrent of criticism over the renegotiation of the ExxonMobil production sharing agreement that provided for a mere US$18 million signature bonus. Concerns have been also raised about the apparent generous tax concessions that have been granted to that American supermajor. Government’s defence has been that ExxonMobil’s presence here is strategically tied to the preservation of Guyana’s territorial sovereignty over the Essequibo Region which Venezuela claims as hers.

Hughes recommended that parents and youths start thinking about opportunities in the sector instead of merely being on the Internet watching music videos.

Professor Thomas has suggested that three to five percent of net revenues from oil revenues be set aside for the very poor to send their children to school, remove others from child labour and improve the nutrition of households. He has floated a figure of US$5,000 annually to eligible households.

The Minister of Finance, Winston Jordan; Opposition Leader, Bharrat Jagdeo and President Bharrat Jagdeo have not been entirely enthusiastic about the idea of conditional direct cash transfers.

United States-based Economics Professor, Tarron Khemraj, mindful of the impact such transfers might have on the number of persons available for work, supports the idea of cash transfers. Financial Analyst, Sasenarine Singh has added that such disbursements should be limited to US$90 million per year and should be tied to taxpayers and social security contributors.