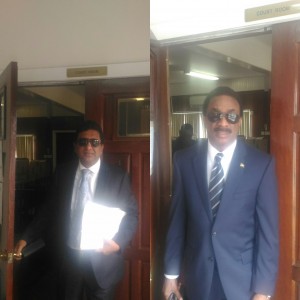 Attorney-at-Law, Anil Nandlall wants the High Court to order the imprisonment of Attorney General and Minister of Legal Affairs, Basil Williams for failing to comply with Chief Justice, Roxane George-Wiltshire’s order that he must activate the Judicial Review Act.

Nandlall is asking the High Court to order that Williams “be committed to Georgetown Prisons, Camp Street, Georgetown for such period and on such terms and conditions as are just for failing to bring the Judicial Review Act Chapter 8:06, into force on or before the 31st day of July, 2018, as ordered by the Honourable Madam Chief Justice Roxane George on the 28th day of May, 2018”.

Before the July 31, 2018 deadline, Williams had appealed the Chief Justice’s decision of May 28, 2018. He has since failed to convince the Court of Appeal that the High Court’s decision should be stayed until the appeal is heard and determined. Appellate Court Judge, Rafiq Khan dismissed Williams application on August 9, 2018.

The Judicial Review Act was passed by the National Assembly and assented to by then President Bharrat Jagdeo on November 2, 2010.

In the latest round of the court battle, documents seen by Demerara Waves Online News Nandlall states that High Court Marshall, Jaishree Motilall served the Attorney General the Court order on July 17 by leaving it with his clerk,  Elwin Souvenir, who undertook to deliver it to Williams. Also, on August 14, 2018,  High Court Marshall, Marvin Mc Queen left the Court order with Williams’ employee, Angela Marks, who also accepted service and promised to deliver it to Williams.

Nandlall said the latest attempt to serve the Attorney General with the document was made on August 15, 2018 but High Court Marshall Ian Adams was unsuccessful at his office on 95 Carmichael Street, Georgetown. However, his Clerk Demi Hipplewith stated that Williams was in a meeting and further, that it was impossible for a Marshall to serve him.

Nandlall, who is a former Attorney General and Minister of Legal Affairs, is seeking to prove that his successor, Williams, has knowledge of the High Court order by the Chief Justice because he has since filed an appeal, a request for a stay of execution, written a press release on the subject and also articles were published in three daily newspapers. “Notwithstanding the above, the Respondent has refused to comply with the said Order of Chief Justice Roxane George; that the Respondent’s conduct is in clear contempt of the said Order of Chief Justice Roxane George and this Honourable Court,” says Nandlall.

The  Judicial Review Act allows ordinary Guyanese to seek legal remedies such as injunctions and compensation against any public officer or any statutory agency. However, the law could not have been activated  without the Civil Procedure Rules which eventually took effect in February, 2017.