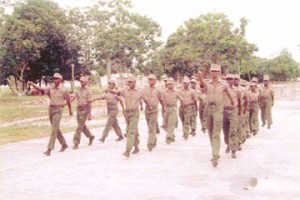 FILE PHOTO: Members of the then Guyana People’s Militia.

The minister, who was responding to a question posed by the Opposition, said those persons were recruited at various levels and are between the ages of 18-35 and are physically and mentally stable for entry.

Special consideration is given to highly-skilled retired military personnel and skilled professionals, the minister said.

Additionally, recruitment teams are deployed to the various regions to sensitise persons on the programme and to recruit those interested.

Advertisements are placed on social media, radio, television and flyers are distributed to attract interest.

The State Minister made it clear that persons are not forced to join the Militia but do so of their own free will.

Minister Harmon also informed the House that after a 10-year hiatus the Reserve Officer Training, conducted by the Guyana Defence Force (GDF), has recommenced and will conclude on June 2019.

Opposition front-bencher, Gail Teixeira queried whether government was exercising political leverage to recruit Militia members especially since the highest number appeared to be drawn from Regions Four and 10.