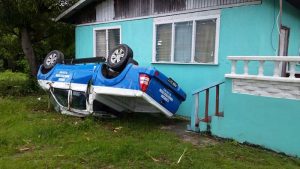 FLASH BACK: The Guyana Police Force vehicle in a yard at De Hoop, Mahaica.

Police Commissioner, David Ramnarine on Tuesday announced that the Guyana Police Force has embarked on a zero tolerance campaign against members of that law enforcement agency who commit traffic offences such as speeding and use of dark tints.

“The occurrences cannot be ones that we can be satisfied with. We have taken an oath, we wear a uniform, we have higher training and learning and, therefore, we must conduct ourselves a lot better than we do,” he said.

The top cop said he has already dismissed several members of the force who have driven without a licence, insurance or road service licence. “Believe it or leave it! How can you tolerate that?” he said.

Addressing an award ceremony at the Tactical Services Unit’s drill square, he announced that members of the police force who damage the organisation’s vehicles in accidents are being made to pay back. He said that on 18 occasions this year where members of the force were responsible for causing such accidents and damage totalling GY$2.3 million, “they were made to pay for the cost of that damage.” He said 10 ranks have already completed payments and the others have some time to pay.

“That is the position we have to enforce. We have long since abandoned and preached against speeding and reckless driving. We have only permitted that in emergency situations and in situations where, for example, you are fired upon and there is great danger to public safety if you don’t take a certain course of action but in normal circumstances…please use your judgment or, as I have indicated, you are going to have to pay as others have had to pay,” he said.

He also disclosed several unimpressive statistics, showing the extent to which members of the force have committed traffic offences with government and privately-owned vehicles. Ramnarine said the tint regulations and other laws hat require licences and insurance are “not to be blatantly flouted”.

The Police Commissioner said from  July 2016 to June 2017, 18 members of the force were involved in various accidents while driving force vehicles and  from July 2017 to June 2018, 23 were involved. He added that over the two-year period the total was 41 ranks including seven subordinate officers and four constables.  Those figures, he said, do not include another 18 ranks who were involved in various accidents with their private vehicles.

“Our membership needs to quickly and constantly appreciate that the rules of the road are for all road users, that once you enter a vehicle and you begin to drive- care, caution consideration, courtesy and commonsense- are equally applicable to members of the force,” he said.

“The traffic situation remains one of serious concern. exacerbated by not only the careless, dangerous  and reckless behaviour of civilian drivers and other road users but by some of our very own who should know better, having received higher learning and training as law enforcement officials,” he said.

He described as “grossly reprehensible and disrespectful and indeed contrary to good discipline and professionalism for members of the force to be equally guilty in breaching road traffic rules”.

The Guyana Police Force is celebrating its 179th anniversary this year.