The newly-elected chairman of the National Toshaos Council (NTC), Nicholas Fredericks singled out the importance of land rights and said the problem dates back to more than 40 years ago when then Toshaos had accepted land titles without consulting their villagers.

Referring to the granting of land titles in 1976 by the then government, he said “they were not given out with free, prior and informed consent. These titles were not presented to a village meeting. The Toshaos at that time made huge mistakes in accepting those titles”.

Those elected to sit on the 20-member  NTC executive are Chairman Fredericks of Region 9, Vice Chairman, Paul Pierre of Region 1, Secretary Russain Dorrick of Region 9 and Treasurer Marbel Thomas of Region 8.

Fredericks stressed the importance of land preservation to the survival of Indigenous Peoples. “The land is one of the most important assets we have in our lives,” he said. 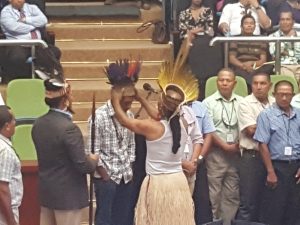 The NTC Chairman called on government to work with  the Indigenous People to resolve their issues.

He expressed the desire for the Lands and Surveys Commission, Guyana Geology and Mines Commission and the National Protected Areas to work together on the Amerindian Land-titling project.

While he credited the Ministry of Indigenous People’s Affairs with creating “some space” over the past three years, he said “there is need for more space”.

“Let us resolve our differences in a friendly and professional manner,” he said.

The NTC Chairman urged the relevant authorities to take advantage of their models and skills in GPS mapping and computers  in Regions 1, 9 and 7 to assist other regions. “A lot of work has been done and don’t let us waste the time and resources that have been provided for these initiatives,” the NTC Chairman said.

Meanwhile, Minister of Indigenous People’s Affairs, Sydney Allicock urged the NTC executive not to fall prey to partisan interests. He advised to be humble, diplomatic and politically neutral instead of pushing political agenda or opinions on others.

“The NTC is not a mechanism to be used to gain fame,” he said.

Allicock stressed the importance of the NTC publishing annual reports and accounts for presentation to the Ministry of Indigenous Peoples and the villages.