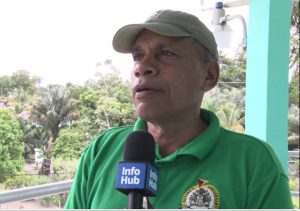 The Inter American Development Bank (IDB) is set to fund the construction of the first Photovoltaic (solar farm) in Bartica, Region Seven. Regional Chairman Gordon Bradford said the solar farm could be up and running by March 2020.

On Monday, the Chairman and bank representatives visited the 14-acre plot of land at Daag Point, Bartica to assess the proposed site.

Speaking with the Department of Public Information (DPI) Bradford said, “We have to get the stakeholders on board, including the Mayor and City Council and the business community. There will be meetings to discuss the project.”

The Chairman said IDB needed to ensure that the land is not “under contention” before it moves ahead with the project. He explained, “We have 14 acres of land reserved for that. The land has already been applied for and cleared. IDB or any funding agency would not spend money on a land that is contentious.”

According to Bradford, upon its completion, power from the solar farm will be fed into the Guyana Power and Light’s grid. He said the region is seeking to minimize its dependence on fossil fuel as much as possible, which currently flies in the face of the town’s pursuit for green energy.

“Clean and green energy is important, if we want to woo investors into our region, we must have a reliable supply of energy”, he added nothing that, “The region has been talking about a new power plant since 2001 and now, here it is!”

In the same area at Daag Point, he explained that construction has begun on the new GPL power plant, which will house three 3.5 megawatt engines. This, he said, is more than enough to satisfy the local demand. The solar farm he said would an additional 100 megawatts to the township.

The Bartica Solar farm would be the second to be completed, following the construction of the Mabaruma Solar farm which is expected to be commissioned in August. This $264 Million farm will supply all-day power to over 700 residents, who are currently receiving only eight hours of power from the Mabaruma Power Company.