Granger floats idea of “social compact”, tells GPSU time for confrontation is over 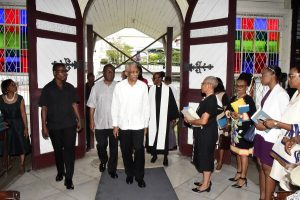 President David Granger raised the possibility of a “social compact” as part of wider call for greater cooperation between government and the Guyana Public Service Union (GPSU).

“We need to establish among ourselves some form of social compact, particularly between the State and the servants of the State. We have to work together. What happens out there is not only the concern of Central Government; it is the concern of all of us… We are partners in administering and running Guyana,” he was quoted as saying in a news release issued by the Ministry of the Presidency.

In the past, efforts had been made to establish a social compact among government, civil society, private sector and the trade union movement.

Granger’s call for a social compact has come at a time when the newly-elected Prime Minister Mia Mottley-led government of Barbados has been holding consultations with that island’s Social Partnership that had been established in the 1990s to map out a strategy to grapple with severe economic turbulence then.

The Guyanese leader was on Sunday speaking at a brunch at State House to mark the 95th anniversary of the union.  He said the old model of confrontation and acrimony must be abandoned in favour of a new cooperative model in the interest of the effective delivery of public services throughout the length and breadth of the country.

President Granger reminded that the Government and the Unions are partners with a common objective; not competitors or rivals.

The GPSU has over the years criticised the past and the present government of violating collective bargaining by imposing annual wage and salary increases, citing the ability to pay. The union usually engages in an annual condemnation of the government’s unilateral salary hike, but does not carry through with its not so veiled threats of industrial unrest.

Making reference to the first major study on the civil service, the 1953 Mills Report, President Granger said that it is his vision and mission to have a highly-skilled and professional public service, which is capable of providing to Ministers of any Government, the best of its organised thought and collective experience, as it is mandated to do; explaining that Ministers will come and go but the body of public servants by whom they are guided, is a permanent fixture. He said that “never again should any government come into office and be faced with a situation in which senior public servants are taken before the courts or are removed from office.”

President Granger also reminded public servants that they must project themselves beyond Central Government and the coast, noting that have to populate the central, regional and municipal systems of Government and, therefore, they must be able to understand and communicate effectively with the people whom they serve. “The public service has to be the custodian of standards and those standards have to characterise the delivery of services to all of the regions… You must be able to understand and communicate in the language of the people in the hinterland… You represent a vital constituency and we cannot deliver public services without you,” he said.

Approximately 95 years ago, civil servants recognised the need for a body to advocate in their interest and sought leave from the Governor to form a Trade Union. Permission was granted and after several meetings, the British Guiana Civil Service Association was formed. At first, it only catered to the needs of senior civil servants but that soon changed when the lower tier of civil servants were encouraged to join.

Over the years, there were many name changes; the British Guiana Civil Service Association was changed after Independence, to the Guyana Civil Service Association. However, in 1972, after a merger with the Medical Employees Union, it became the Guyana Public Service Union. First Vice President of the GPSU, Ms. Dawn Gardener said that despite the name changes, the Union remains committed to its motto ‘Justice for Public Employees’ and continues to ensure that the welfare and conditions of service for public sector workers, improve.

Ms. Gardener spoke of all the milestone accomplishments that the Union, working with the Government, was able to achieve. This includes the long-awaited regularisation of sweeper-cleaner conditions of service. “We all join with His Excellency in his call for a professional, career-driven public service but we cannot do it alone, we have to do it collectively,” he said.