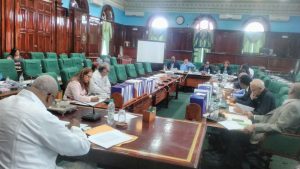 The Natural Resources Committee hearing in session under the chairmanship of Mr. Doings Lumumba

Four and a half years into a five year Government Amerindian Land Titling Project, its work programme only 26 per cent completed.

The project life comes to an end in October 2018, having stared in 2013 and, according to Minister of Indigenous Peoples’ Affairs, Vice President Sidney Allicock, the work programme will require another decade work before it could be completed.

The contentious matter came up for hearing on Wednesday when Vice President Allicock apprised the standing Parliamentary Committee on Natural Resources of the developments made on the ALT programme.

According to Vice President Allicock, the Ministry currently lacks the manpower and other non-financial resources to complete the project. He informed the Committee Chaired by Peoples Progressive Party Civic’s (PPP/C) Odinga Lumumba that he would have to seek an extension of the project life.

He said only about 25 per cent of the total US$10M earmarked for the project has been utilized thus far and as such funding was not the constraint.

Minister of State, Joseph Harmon, present for the Committee hearing, drew the chairman and member’s attention to mid-year project evaluation which had blamed a change in government and a retarded implementation in 2013 as among the critical bugbears. Technical and political hurdles were also identified by the United Nations Development Fund undertaking the ALT evaluation.

Vice President Alicock, in providing the update,  told the Committee Members some $500M or just about US$2.5M of the total funding has been spent.

He said, apart from the resource hurdles, such as the lack of a skilled anthropologist the matter of Free Prior Informed Consent (FPIC) has also proved to be time consuming given the sensitive nature of the matter at hand—land.
He used the occasion to bemoan the discarded Commission of Inquiry (COI) that would have also engaged the matter of Amerindian Lands, since according to Vice President Allicock, this would have afforded more technical resources.
“That was purpose of the COI,” Allicock charged, and said “we would have been able to spend more time, and have more resources (on ALT),”

In his report to the Committee, Vice President Allicock disclosed that the Ministry of Indigenous Peoples Affairs is aiming to complete the demarcation of an additional four communities by the end of the stated project life—October.