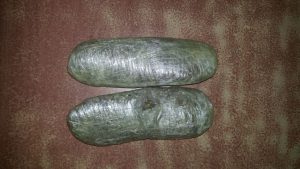 The marijuana that prison authorities said was found in the possession of a prison officer. Two officers have since been arrested.

Two Guyanese  prison officers were arrested Sunday night after they allegedly collected one pound of marijuana from a civilian at the Georgetown Public Hospital where they were on duty.

Director of Prisons, Gladwyn Samuels said one of the prison officers has since admitted to having been paid GY$20,000 to  collect a parcel. “A prison officer admitted to collecting the item from a civilian to take for a prisoner to eat,” Samuels.

Samuels praised officers of the Criminal Investigations Department of the Guyana Police Force’s station at Brickdam “who responded promptly when I ran into the department and requested help tonight.”

The Prison Chief said based on information received two prison officers collected a parcel from a civilian while on duty at the Georgetown Public Hospital.

“The parcel was reported to contain seeds, leaves and stems suspected to be marijuana,” he said.

He said an operation was set up and the bus they were traveling in was stopped on the East Coast Demerara bus park area. “A search was carried out by police and the suspected marijuana was found in a black bag in the possession of a prison officer,” he said.

He said the two prison officers, who were together,  were escorted to Brickdam Police Station.