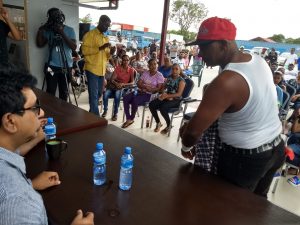 PARAMARIBO – Noting that the recent attacks on Guyanese fishermen in Surinamese waters are no random acts of violence for economic gains, Opposition Leader Bharrat Jagdeo not only called for swift action from the governments of Suriname of Guyana, but also for special prosecution of perpetrators.

During a meeting Sunday in Suriname with fishermen, families of missing fishers, boat owners and survivors, he stressed that his party will file a motion this Friday in parliament regarding the pirate attacks.

Suspects caught in Guyana shouldn’t be prosecuted as routinely by the police prosecutor since, according to Jagdeo and MP, Anil Nandlall,  they are not properly trained for such cases.

“If they are going to prosecute this matter, which we expect them to do they must hire a prosecutor. A lawyer must be send to prosecute this matter”, Nandlall argued. Nandlall, a former Attorney-General, further added that a policeman facing a high-paid defence lawyer “is not a fair contest”. Therefor  his People’s Progressive Party (PPP) will call for the Director of Public Prosecutions (DPP) to send a lawyer to prosecute this matter. “That’s the only way that you will have a fair representation of the interest of the deceased persons”.

According to Jagdeo the Guyanese government should also handle this issue differently than regular pirate attacks. “We have to explore not to only using the piracy law, but the terrorism law in Guyana to go after this”, he noted. He will also raise this issue in parliament. Both politicians told the audience that a case such as the recent attacks can’t be dealt with as ordinary crimes of violence. When there is other evidence presented the authorities should apply different laws to keep suspects longer in custody in order to increase the chance of a successful prosecution. “You have to treat it exceptionally, even if there is a 72-hour rule and you have a suspicion in this kind of situation and evidence”, Jagdeo noted.

The former president also called for a unified stance within Guyana and between Suriname and Guyana to tackle the piracy issue “We will support the government of Guyana as much as it’s so reprehensible. On this one we will collaborate with the government, work with them because we hope they don’t play politics with this”, Jagdeo told the gathering. Several persons including relatives of the missing fishermen and boat owners related their stories. “Dem thieving we. We need justice. Real justice. When you catch dem just finish dem, please”, said a businesswoman who lost several fishing boats due to pirate attacks and now has to cope how to repay a loan she took on her house to finance her operations. “We have no income. We can not buy a bicycle or a bicycle tire now”, she said. 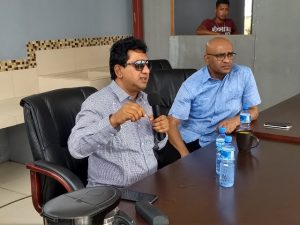 The despair by relatives who are still searching for answers regarding their loved ones was palpable throughout the meeting.The families and the survivors described in great detail the horrors that they have endured at the hands of criminals and expressed great fears that these atrocities will be repeated unless the perpetrators are arrested and brought to justice. “All I want is justice. They tie his hand to his neck. What I heard is they tie batteries around his foot and they throw him in that water. That is not fair. This is not fair… If I will get that person that do that to my nephew, I myself will kill him back. Trust me, I myself go kill him back”, said the distraught aunt of Ramesh Sancharam, one of the missing fishermen said.

Meanwhile a delegation of the Guyanese government, led by Home Affairs minister Khemraj Ramjattan, is holding talks with the Surinamese authorities Monday (May 7, 2018)toda to find resolutions for the armed attacks offshore. During a meeting with the Guyanese fishing community last Saturday the Surinamese Minister of Defence disclosed what measure his government has taken so far to tackle the issue and make the sea more safe. He noted that the marine of the Surinamese army including choppers are being deployed to patrol the area. “Within one one week you can go back to sea and ply your trade. Because when you loose money, the country loses money”, Defence Minister Ronni Benschop told the fishermen.

Guyanese fishermen and boat operators are the main suppliers of fish for the Surinamese market, an industry valued at US$ 45 million annually.