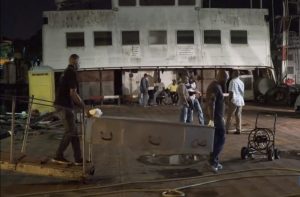 According to Mark Lall, secretary of Visserscollectief, a local fishermen’s association, the captain of the boat was killed. The whereabouts of his crew members is uncertain.

Several fishing boats, the Coast Guard and other law enforcement agencies are currently on their way to the area near Matapica Canal where the latest attack allegedly took place. “When we arrived at the location we will know more about what has happened”, Lall told local media. Meanwhile the body of one of the victims of Friday’s attack has been recovered last evening from the Wia Wia mud flat and brought to the capital.

The Coast Guard sailed out again Thursday morning to recover two more bodies that where spotted in the same area. Recovery attempts yesterday where hampered said Lieutenant Colonel Jerry Slijngard, who is coordinatimg the rescue and recovery operations. “The mud is very thick and rescue workers had to crawl on their belly to reach the location”, said Slijngard, director of the National Coordination Center for Disaster Management (NCCR). He further noticed that the recovered body bore marks of violence.