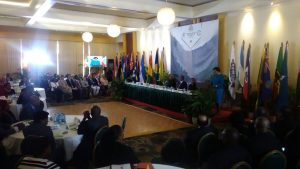 Guyana on Thursday hosted the inaugural workshop for Regional Judges and Prosecutors with a call by the country’s Attorney General and Minister of Legal Affairs, Basil Williams SC., for more convictions and the confiscation of the proceeds of criminal ventures for the benefit of the State and other victims.

This, if the global efforts of the international Financial Action Taskforce (FATF) are to be effective. Williams was at the time addressing the opening of the workshop venued in the Savannah Suite of the Guyana Pegasus hotel.

According to Minister Williams SC., while many of the Caribbean countries have enacted AML/CFT legislation, convictions and confiscations of criminal proceeds (laundered money for example) have been moderate.

The Guyanese chief legal officer implored of his regional counterparts that given FATFs current evaluation of the effectiveness of the AML/CFT regimes in place and the crucial role it plays in the overall FATF standards there is need to have a renewed engagement with regional Judicial and Prosecutorial Officers.

Guyanese Head of State, President David Granger, in his feature address, drew reference to the fact that the fragmented Caribbean jurisdictions is susceptible to the vagaries of international financial criminal cartels.

Small Caribbean states, he said “are limited not only in size but also in human resources, in technology and capital,” and these he said constrains the ability of the regional forces to tackle the financial criminal cartel.

As such he lauded the initiative, saying workshops such as the one being hosted are an important initiative for establishing mechanisms to strength the sharing of best practices which relate to financial crime.

The Guyanese President posited illicit proceeds can contaminate the voluminous financial transactions that take place in the region and that citizens without the protection of the rule of law can become captive to slick organized crime and that this must be safeguarded against.

President Granger, like his Attorney general Williams SC., also spoke to the need for increasing the likelihood of interdictions and the confiscation of criminal proceeds in addition to putting in place penalties that act as deterrents.
Caribbean countries must be strengthened if they are to protect their institutions against the threats of money laundering and the financing of terrorism.

Organised by the Commonwealth Secretariat, that organisation’s Secretary- General Baroness Patricia Scotland used the occasion to call on the judicial officers present to build on the longstanding relations to build on existing regimes and to leverage resources and to exploit commonalities such as common legislation, language and cultures.
“We can either swim together, or drown separately,” the Commonwealth SG implored, having called on members to be vigilant guardians in protecting its people from what are now major transnational crimes—featured prominently.

Supporting the calls made by Guyana’s Attorney general, baroness Scotland spoke to the fact there is need for greater interdictions of transnational crimes including money laundering and the financing of terrorism.

The more we can interdict, she said, the more likely our governments will have the resources needed to for the roads and health services saying, “it is not a victimless crime, so what we are doing is helping to preserve the lifeblood of our countries.”

The regional two-day workshop will delve into, among other areas, investigative orders, and the regional technical and administrative compliance with FAFT regimes ahead of the upcoming fourth round of evaluations.