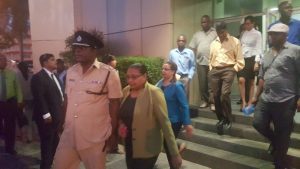 FLASH BACK: Senior officers of NBS being escorted of the building to waiting police vehicles.

Anil Beharry, Anil Kishun and Deka Tullahram  appeared before Senior Magistrate Fabayo Azore in the Georgetown Magistrates’ Court to answer to the charges.

The trio pleaded not guilty to the charge that alleges that on January 23, 2018 at NBS office at Avenue of the Republic, Georgetown, they wrongfully held Gina Arjune, Ganesh Hira, Gudish Singh, Shawn Kalicharran, Alex Greene, Martin Brown, Patrick Higgins, Joseph Allen and others.

That lockdown came as High Court Marshals when to the mortgage institution to enforce a High Court order issued in December, 2017 in favour of former NBS official, Maurice Arjoon who the court found was wrongfully dismissed 12 years ago.

The trio was released on self bail and the matter was transferred to Magistrate Dylon Bess for March 26, 2018.

2018-03-21
Garfield Shortt
Previous: Manager of Trinidadian soca artiste, Rodney “Benjai” Le Blanc testifies in assault case
Next: “If you tear this contract up, nobody else will come” – British Economics Professor on ExxonMobil’s contract with Guyana